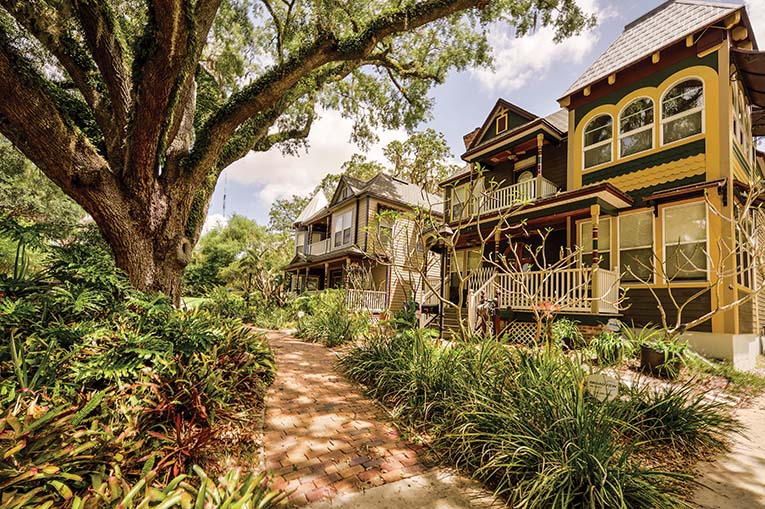 One of the many charms of Thornton Park is its unique, colorful architecture (ROBERTO GONZALEZ)

Stroll through Downtown Orlando on a weekend, and you’ll see happy-go-lucky revelers spilling out from their favorite watering hole and zipping down the sidewalk on electric scooters, or fans decked out in Orlando City, UCF or Orlando Magic gear to cheer on their hometown team. However, if you were to walk through The City Beautiful in 1886, it would be quite a different scene—one that likely involved local alligator wrestler Bunk Baxter entertaining crowds on the street.

Once inhabited by the Seminole and Creek tribes, Orlando was shaped by the rise of the Atlantic Coast Line Railroad, and by the 1920s, it was a booming cattle and citrus town. While many of the old infrastructures that once lined the streets are still intact, like The Beacham Theatre and the Bumby Hardware Building, the fabric of the city has changed. Now, the metropolitan area is a thriving business district that’s constantly improving upon itself. Over the past decade, the city center that was once occupied with primarily financial institutions is now home to new residential living concepts, two professional sports teams, and the University of Central Florida’s downtown campus. Downtown Orlando also has evolved into a major cultural hub.

One of the pinnacles of this culture-driven shift is the Dr. Phillips Center for the Performing Arts, a state-of-the-art venue designed to showcase everything from Broadway shows and comedy acts to live musical acts and performances by the Orlando Ballet. Other initiatives like Orlando’s Wall Crawl, a social media-driven concept, and Creative City Project’s Immerse, a large scale, interactive pop-up installation, have reinvigorated the city’s art scene as well.

However, you can’t talk about downtown without mentioning its vibrant nightlife scene. While the glory days of Church Street Station and glitzy nightclubs may be in the past, there’s a culinary and craft cocktail renaissance happening downtown. “I love the creativity of some of the people who’ve been in the neighborhood for some time but have changed and updated their concepts to something more European and upscale,” says Beatrice Miranda, who has lived in Orlando since 2002. “A perfect example is Mathers. They’ve changed the vibe of downtown.”

Downtown restaurants and bars such as Artisan’s Table, Dapper Duck, and The Boheme  do a brisk brunch business on the weekends. The daytime revelries go beyond downtown proper, with many arguing that adjacent neighborhood Thornton Park has even more of a Sunday scene, thanks to the ever-popular farmers market and hotspots like The Stubborn Mule and Eola Wine Company. 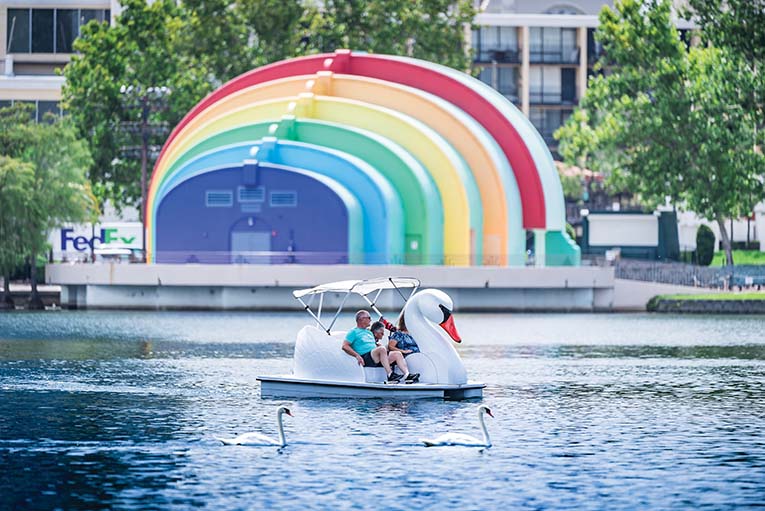 At the heart of the city is Lake Eola, where residents can rent Swan Boats and catch a live performance at the Walt Disney Amphitheatre (ROBERTO GONZALEZ)

Part of the beauty of Thornton Park, a mere 10-minute walk from downtown proper, is that it’s a more sophisticated slice of Orlando, which is part of the reason the area’s been dubbed “Downtown for Grownups.”
Located on the southeast side of Lake Eola, the neighborhood is known for its brick streets, bungalow-style houses, dog-friendly atmosphere, and urban feel. One of its major draws is its accessibility: “I love being able to walk out my front door and eat and drink anything I want at any time,” says Leo Hunt, a longtime resident and president of the Thornton Park Neighborhood Association. “Plus, the proximity to Lake Eola is great. I love everything about the neighborhood.”

Thanks to rapid development in the area, with multiple residential projects currently being built, Thornton Park is a far cry from what it used to be. “There didn’t used to be a lot of businesses here,” recalls Hunt. “I remember when Dexter’s first came and that was a very big deal.” Lisa Cuatt, executive director of the Thornton Park District agrees: “It’s really turned around—from not feeling safe to bourgeois.”

Part of Thornton Park’s revitalization comes from the community itself. “We’re friendly here. You stand in line at Starbucks and get into conversations with people,” says Cuatt. “And if you’re a regular somewhere, you can walk in and the staff knows what you drink or what your favorite lunch is.”

Also, local business owners have banded together for the greater good. Just ask Todd Ulmer, owner of Stardust Lounge and Aku Aku Tiki Bar. “I’ve been blown away by how technically competing businesses work to bring people to the district first and then worry about bringing people into their business,” he says. “We all have one brand as the Thornton Park District, which helps us all out in the end.” This collaboration has led to some of the area’s most popular events like the monthly Wine Walk, The Hullabaloo (a beach party/music festival hybrid that was held in Lake Eola Park this past January), and the annual Come Out With Pride festival and parade.

“Ever since I first opened Stardust, we’ve had such a mixed age group, a mixed social group, and a mixed race group,” says Ulmer, and it reflects the community. “Thornton Park is truly a neighborhood that brings everyone together.”

This article appears in the July 2020 issue of Orlando Magazine.
Categories: News and Features
Tags: Downtown Orlando, great neighborhoods, homes, Lake Eola, thornton park
Want to read the whole issue? Download and read this issue and others on Magzter.