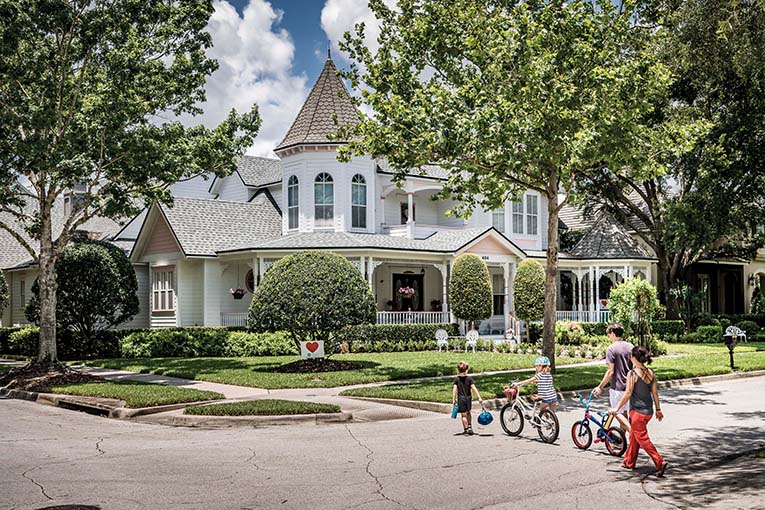 In 1966, the year he died, Walt Disney had been focused on his next big project: an Experimental Prototype Community of Tomorrow. Creating an EPCOT was one of the last dreams of America’s biggest dreamer.

For years, the Walt Disney Company worked to bring his idea to fruition. In 1982, Disney opened EPCOT theme park with many of Walt’s futuristic elements, yet it wasn’t a community where people could live and work. So in 1987, Disney announced plans to build the town of Celebration. Locations were scouted across the country and in 1991, the company landed on a spot just south of the Magic Kingdom. One of the Imagineers with the task of designing Celebration was Tim Johnson.

“Our team was lucky enough to fly in Walt’s plane all around the Southeast to look not just at design, but determine what really makes a community,” says Johnson. “We got out legal pads—no iPads then—and scribbled what we liked and didn’t like. We loved the squares of Savannah, the open views of the golf course in Coral Gables, the porches in Charleston, and the narrow streets and wide sidewalks in Seaside. And we knew we didn’t want a gated community.”

After working on the project for five years, Johnson and his wife Pam became the 30th family to live in Celebration when it opened in 1996—and they remain in their original house today.

“At the time I was only thinking of shortening my commute, but Celebration has become home, and the town is my family,” Johnson says.

Now retired, he calls his time on the project a dream job, especially working with such renowned architects as Michael Graves on the post office, Philip Johnson on the original town hall and Cesar Pelli on the cinema. Johnson now teaches a class about the master planning of Celebration at the University of Florida in Gainesville and CityLab-Orlando. 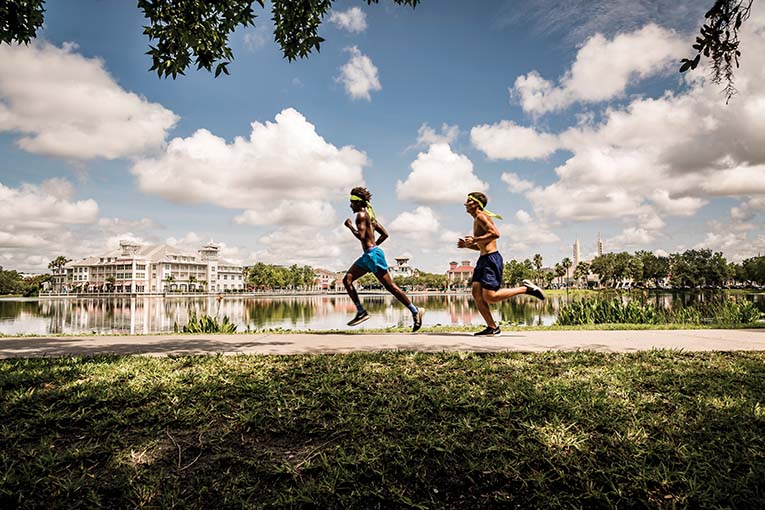 Celebration is a family friendly neighborhood, with plenty of lakes, waterways, pocket park and other green spaces suitable for picnics, exercise and other activities. (ROBERTO GONZALEZ)

Disney sold Celebration in 2004, but the intrigue remains. Before the pandemic, tour groups were bused in with people from all over the world wanting to catch a glimpse of the town that Disney built.

Kathleen Sipio discovered Celebration while she was vacationing at Walt Disney World from New Jersey.

“We immediately fell in love with its charm and knew this is where we wanted to raise our daughter,” recalls Sipio, who now serves as executive director of the Celebration Foundation. “Jacqueline started riding her bike to school when she was in 2nd grade. I sent her off down the sidewalk, and neighbors texted me along the way. She’ll be 16 this year.”

Many international families have landed in Celebration because of its close proximity to jobs at Disney’s corporate office as well as nearby theme parks.

“My boys have gone to school with kids from Greece, Venezuela, Brazil, Mexico and France as well as all over the country,” says resident Katie Woodall, who moved from New York five years ago. “Nobody is really from here, so everyone is eager to meet friends. And the community parks and swimming pools make that easier.”

Celebration features dozens of pocket parks, neighborhood playgrounds, expansive green spaces and miles of scenic boardwalks and bike trails. While the swimming pools and a few playgrounds are for residents only, the public is generally invited to enjoy the town’s amenities.

After getting some exercise, grab a bite at one of Celebration’s restaurants or sidewalk cafes then peruse a few of the Market Street shops. Downtown is also the center of much of the town’s activities, including the Sunday farmers market, which is expected to reopen this summer.

Celebration goes all-out during the holidays with nightly snowfalls downtown and elaborate light displays. The neighbors of Jeater Bend Drive were featured on ABC’s “The Great Christmas Light Fight” in 2015. Says Johnson: “When Celebration first opened, the foundation gave out strings of lights to all new residents. You could take as many as you wanted.”

All of that town spirit has gone a long way to helping the community prosper, especially this past spring. “Our town has done fairly well during the pandemic,” Sipio says. “All of the places to walk and exercise have been great for our mental health.”

Celebration’s strict homeowners association has never permitted political signs or even standard real estate signs, but they made an exception this spring. Residents stuck signs in their yards to honor healthcare heroes. (AdventHealth Celebration employs 1,650 people.)

“This really is such a phenomenal town,” says Sipio. “Our residents are from all different religious backgrounds, different upbringings and different continents, yet we’re all brought together to be part of this community. I wouldn’t want to be anywhere else.”

This article appears in the July 2020 issue of Orlando Magazine.
Categories: News and Features
Tags: celebration, Disney World, great neighborhoods, Kissimmee, Orlando
Want to read the whole issue? Download and read this issue and others on Magzter.