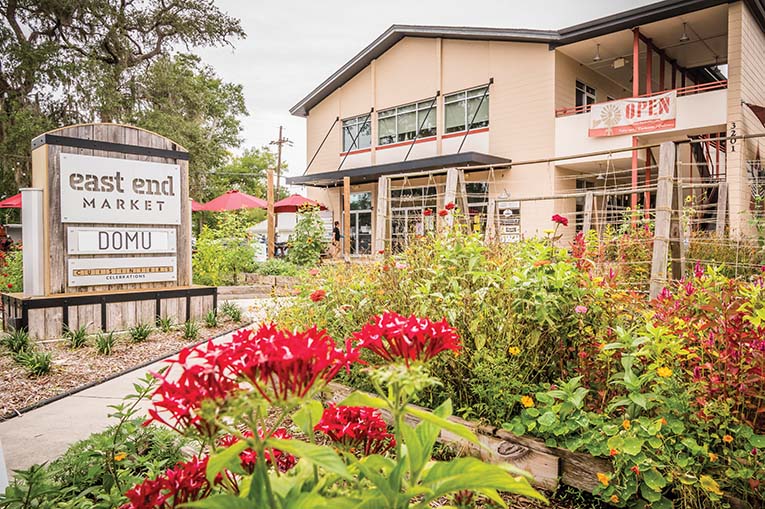 When Evi Schulz visits the Audubon Park Community Market on Monday evenings, she’s buying vegetables and herbs that were grown in her neighbors’ yards.

“How awesome is it?” the five-year resident says. “They grow vegetables here in the area, and I can buy them at the Monday evening market. That bonds us together.”

Fleet Farming helps neighbors in the area grow their own food—a portion of which goes to Fleet to be sold at the Monday night farmers market. Sustainability has come to define Audubon Park, which has been designated a National Wildlife Federation Community Wildlife Habitat (meaning the area has created natural environments for animals). There are also community fruit trees planted in the yards of residents and businesses, and everyone is encouraged to pick their own.

“People keep walking by saying, ‘We’re waiting for our pomegranate,’ ” she says, laughing.

Jennifer Marvel, executive director of the Audubon Park Garden District, says the community has come a long way, considering its nickname at Orlando City Hall used to be Audupotty—for the wastewater treatment plant that was once located nearby—and it’s most eccentric business was a calculator repair shop that had anti-abortion literature taped to its windows. When the neighboring U.S. Naval Training Center—now Baldwin Park—shut down after 30 years in 1998, affordable rents and a centralized location began to draw the eclectic mix of businesses Audubon is now known for, such as Stardust Video and Coffee, The Lovely Boutique, and East End Market.

“We went from Audupotty and the
anti-abortion calculator repair guy to this,” Marvel says. “It’s pretty transformative.”

Audubon was a part of the U.S. military base until the 1950s when it was developed into a housing community to support the military workers and their families.

A half century later, Audubon’s neighbor to the east underwent a similar transition. Susan Comisky, Baldwin Park Resident Owner Association community director, says her neighborhood infuses the military into each of its festivals to celebrate the fact that Baldwin Park’s 1,100 acres—now populated with homes and businesses and plenty of green space—was once a training ground for soldiers who served in various branches of the military going back to the 1940s.

In 2018 the Blue Jacket Recruit, a bronze statue of a female Navy recruit, joined her male counterpart, the Lone Sailor (erected two years earlier) in Baldwin Park’s 75-acre Blue Jacket Park, named after the 243-foot-long ship that was used for training here. The community’s civic building, Grace Hopper Hall, was named after U.S. Navy Rear Admiral Grace Hopper, who coined the term “bug” to describe a computer software glitch after a moth got trapped in a computer.

Baldwin Park resident Elise Knaus says her kids were delighted when their neighbors uncovered a piece of the military base’s parking lot while planting new shrubs in their yard,

When she moved to the neighborhood five years ago, Knaus says, parents contacted her to have the kids meet each other before the school year, which helped them make friends easily. She also joined the Baldwin Park Kids Club, a “mom’s group.” It’s one of 18 clubs in the community, which includes the Nifty Fifties, one of the most popular. There are also traveling, book, cooking, basketball and art clubs. 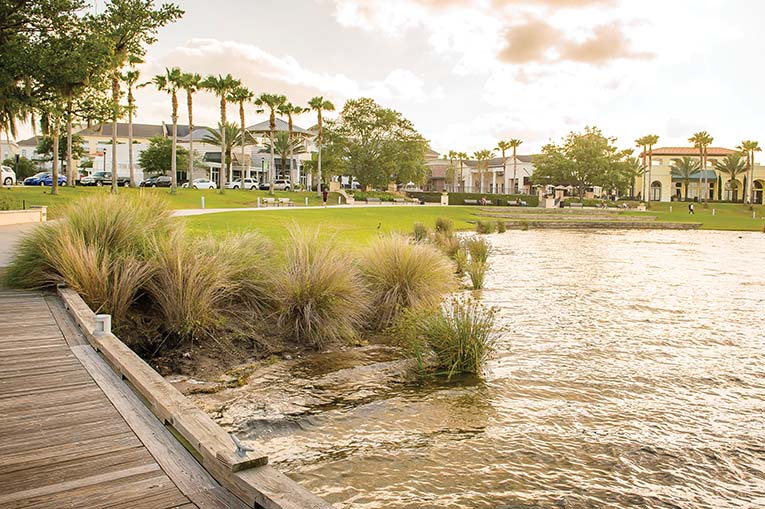 Denny O’Neil, one of the original homeowners in Baldwin Park, was attracted to the community’s walkability. What he found, however, was that the residential design was also conducive to neighborliness. The roads are narrow, which he says keeps drivers from speeding, making streets safer for children. The houses are built close to the sidewalks with front porches facing the street. “You cannot ignore the people walking by,” he says. “You get to know people.”

The bells at Covenant Church have been ringing throughout Audubon Park at noon and 6 p.m. daily since the church was built in 1954. Pastor Robinson says people tell her that hearing the bells reminds them to take a moment and reflect. It also brings them back to simpler times when people needed the reminder that it was lunch or dinner time.

Robinson says the church has always been a community hub, hosting cookouts and serving as a hurricane relief center when necessary. The church also welcomes different organizations to meet there, such as Orlando Permaculture, which offers classes on everything from gardening to how to make homemade deodorant.

But she said she believes it was the era in which the community was built—when neighborliness was commonplace—that has preserved that lifestyle in Audubon Park.

“The houses are small; the land is bigger,” she says, and that creates a desire for people to spend more time outside. “There are mostly carports instead of attached garages, so you’re not driving into a garage, disappearing into your house and never coming out. It makes for more neighborliness.”

And that community-centered attitude, in turn, makes people think about their environment more. Schulz’s neighbors often stop by her home to ask questions about her low-maintenance, xeriscaped yard. She says her neighbors frequently share information and willingly help each other out.

“People here are so open,” she says. “We have lovely neighbors.”

This article appears in the July 2020 issue of Orlando Magazine.
Categories: News and Features
Tags: audubon park, Baldwin Park, Orlando
Want to read the whole issue? Download and read this issue and others on Magzter.