41 E. Ann McGee
President, Seminole State College »Age: 65
Seminole State is celebrating its 50th anniversary this year, and McGee—only the college’s second president—has been at the helm since 1996. During that time SSC has grown from a single campus in Sanford to a four-site college offering four-year degrees to over 30,000 students. So far this year the college has landed $10.6 million in grants, including a $900,000 allotment to expand its sustainable engineering program and $2 million to provide training for the construction industry. McGee also has worked with Seminole County Public Schools to reduce the numbers of incoming freshmen who need remediation in math (from 78 percent to 15 percent). She is active in various community organizations, including Heart of Florida United Way, where she is board chairman.

42 Daniel Webster
U.S. Representative »Age: 66
Last fall, Webster circulated a white paper calling for a Republican change in Congress titled “Widgets, Principles and Republicans.’’ He asked for more transparency and cooperation. It led him to his surprise nomination as a challenger to Republican House Speaker John Boehner, who soundly defeated him. Boehner promptly punished Webster by removing him from the powerful House Rules Committee. Webster now sits on the House Committee on Transportation and Infrastructure and three of its subcommittees. The Winter Garden Republican’s calling card is returning office budget money back to the government to show fiscal responsibility—$382,000 for last year. He is on track to cut a cumulative $2 million from his congressional budget since taking office in 2010.

43 Rich Maladecki
President/CEO, Central Florida Hotel and Lodging Association »Age: 61
Maladecki is in his 18th year as head of the CFHLA, whose membership includes more than 80 percent of the over 120,000 hotel rooms in Orange, Osceola and Seminole counties. Obviously times are good, with Orlando setting records for tourism, and Maladecki’s group is active in lobbying politicians for family-friendly policies (no casino gambling and no early school start dates from summer vacation). The CFHLA also holds numerous fund-raising events, with proceeds providing $100,000 in hospitality scholarships this year. It donated $250,000 to the Dr. Phillips Center for the Performing Arts in return for the naming rights to a coffee bar.

44 Patty Sheehan
Orlando City Commissioner »Age: 53
Sheehan, along with Regina Hill, has carved a niche as perhaps the most approachable city commissioner—and one embracing grassroots efforts. She was vocal in her opposition to the destruction of historic Tinker Field, butting heads with Mayor Buddy Dyer on the issue (eventually the city decided to preserve the field and diamond but tear down the grandstands). She’s also speaking out against a proposed development that would do away with Constitution Green park and its live oaks. On the neighborhood level, Sheehan is also working to extend the city’s urban chicken program.

45 Mark NeJame
Attorney, Philanthropist »Age: 60
NeJame is a familiar face, both on billboards and on television. He recently took on the defense of Matthew
Apperson, accused of shooting at George Zimmerman, the man acquitted in the death of teenager Trayvon Martin in 2012. NeJame also represented Congressman Alan Grayson in his high-profile divorce proceedings. NeJame has made regular appearances as a commentator on national and local news shows. He and his wife, Josie, are founders and hosts of one of the area’s most popular fundraising galas. Now in its fifth year, Runway to Hope, which pairs 150 children battling cancer walking a runway with celebrity escorts, raised a record $1.2 million in May. Proceeds go to support and aid children and their families impacted by cancer.

46 Dick Batchelor
Business and Political Consultant, Social Advocate »Age: 67
When local leaders need a familiar voice to get their message across on topics involving social issues and children, they often turn to Batchelor. Last fall, the former state legislator helped lead a successful effort to pass a half-cent sales tax to fund Orange County schools construction and is chairing a county panel studying family homelessness. He also co-chairs the Orange County Domestic Violence Commission, which in the coming year will focus on ways to reduce child abuse. Expect Batchelor, a longtime Democrat, to be active in raising money for Hillary Clinton’s campaign for president. Batchelor serves on the boards of the First Amendment Foundation and Leadership Florida.

47 Bryce West
Philanthropist »Age: 51
Perhaps you haven’t heard of Bryce West. But you have surely seen the results of his generosity. West has contributed more than $2.5 million to local arts, health and social service organizations over the years. Some examples: He donated $1 million to the Dr. Phillips Center for the Performing Arts. Most of his $600,000 contribution to the Orlando Philharmonic went toward its purchase of The Plaza Live theater venue. The Orlando Shakespeare Theater and Orlando Health Foundation have also been his beneficiaries. West, who serves on numerous civic boards, is a founding member of the Zebra Foundation for Youth, and his $500,000 contribution financed the purchase of a house on Mills Avenue that offers support and services to lesbian, gay, bisexual and transgender youth.

48 Jacob Stuart
President, Central Florida Partnership »Age: 66
A veteran business leader and civic cheerleader, Stuart headed the Orlando Regional Chamber of Commerce for 25 years before becoming head of the Central Florida Partnership in 2008. The latter group, a consortium of business and government leaders, has grown to serve seven counties and 86 cities, with myriad programs. They include Leadership Orlando, where participants interact with a variety of public, private and civic leaders. The program celebrated its 30th anniversary this year. Meanwhile, the Partnership has fielded panels to study transportation and the area’s relationship with international business. Stuart also served on a task force that helped develop a Senate proposal on the expansion of Medicaid. And he’s excited about 2019, when Orlando will host the World Chambers Congress, which is held every two years in a different region of the world and draws business leaders from more than 100 countries.

49 Ken LaRoe
CEO, First Green Bank »Age: 57
LaRoe made national news last year when he announced that his employees deserved a “living wage’’ and that no one would be paid less than $30,000—in other words, the base pay would be nearly $15 an hour, nearly double the Florida minimum wage. “We don’t believe in low wages. We don’t need them to make money,’’ LaRoe told CNNMoney. Calling itself a “local bank with a global mission,’’ First Green operates five branches throughout Central Florida, and the green mantra extends from its buildings—environmentally friendly and energy efficient—to its loan offerings that encourage customers to embrace solar power. LaRoe is on the board of the Global Alliance for Banking on Values, a network of banks that works toward sustainable development in  unserved communities. LaRoe was named a finalist for Ernst & Young’s Entrepreneur of the Year Award. 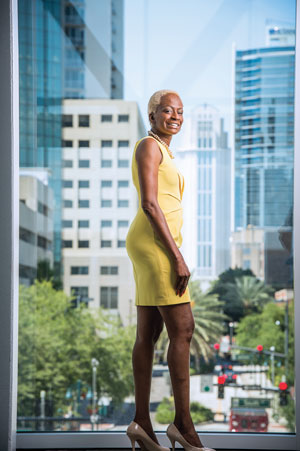 An Inspiring Climb From the Depths to City Hall

50 Regina Hill
Orlando City Commissioner »Age: 49
A year ago, in the midst of a 19-page summary of her goals as a newly elected Orlando city commissioner, Regina Hill included a subtle autobiographical clue by quoting from a poem written in 1925 by Harlem Renaissance writer Langston Hughes:

Life for me ain’t been no crystal stair.

What fits her equally well is the moral of that poem—which is to keep on climbing, regardless.

She won the seat to represent District 5, which includes the hard bitten, historically black Parramore neighborhood where she grew up, by living down a lengthy criminal record that included passing bad checks, possession of crack cocaine and driving while intoxicated.

She had been a promising student at Jones High School and enlisted in the Navy after graduation. But her military career was cut short by an injury, and when she came back to Parramore, she fell in with a rough crowd that included a crack-dealer boyfriend.

Soon she was a welfare mother with two children, and though she says she never did drugs, she developed a tough, mean-streets persona. “I was angry, mouthy, rebellious,” says Hill, 49. “I spent a lot of time digging holes for myself. Then I’d pull myself out of the hole and say: ‘See? I got out!’”

She worked her way out of the cycle thanks to a combination of ministers, friends and employers who believed in her. Hill says it was her participation in a church mentorship program that finally led her to a moment of insight that changed everything. “What I realized,” she says, “is that the holes were in my soul.”

“What sets Regina apart is her humility and honesty,” says her pastor at Majestic Life Church, Riva Tims. “The growth that I have seen in Regina's character stems from her willingness not to make excuses for difficult situations or mistakes. It was difficult and painful for her to hear negative comments during her campaign. But Regina decided to stand on Isaiah 61:7—‘Instead of your shame you will receive a double portion.’’’

Prior to her grassroots campaign for the city commission seat, Hill worked as a community volunteer and as a nurse, a job she thought she’d be able to keep, in addition to her duties as city commissioner. It’s not working out that way. She says she’s been putting in 60-hour work weeks at City Hall, most of that time devoted to her initiatives to secure the basics that remain elusive in west Orlando.

As she well knows, that Langston Hughes sentiment is just as applicable to parts of her district as it is to her.

She recently met with developers who are exploring the idea of building a much-needed supermarket in west Orlando, which is, as she puts it, “a food desert.” She’s also working on crime prevention, to expand youth support groups, and to bring jobs and services to west Orlando, conducting meetings in her fourth-floor office, which is dominated by a painting of a woman in a pretty silk dress, clutching a Bible.

One of her early allies at City Hall has been fellow commissioner Patty Sheehan, who has become both mentor and friend.

“When I first got here, nobody told me where the bathroom was,” says Sheehan. “A lot of people in my line of work do it for the ego. But Regina has a servant’s heart. I really admire that in her, but she’s going to have to be careful. People will take advantage of you. She has to learn to balance that out.”

These leaders are also making a mark in our community.

Glen Gentele
As director of the Orlando Museum of Art, Gentele continues to bring in progressive shows, and last fall the museum received its largest bequest ever—nine paintings valued at $8.3 million.

Marva Johnson
Florida’s Board of Education recently elected the corporate vice president for Bright House Networks as its chair. Gov. Rick Scott first appointed her to the panel in 2014.

Gene Lee
The former president and COO for Darden Restaurants took over for departing CEO Clarence Otis in February to guide the Central Florida-based giant through challenging times.

Gregg Pollack
The tech firm organizer and entrepreneur sold his Orlando-based Code School for $36 million in January. Watch for his future investments.

Ken Potrock
The head of Disney Vacation Club is a key player in the area’s  branding campaign, “Orlando: You Don’t Know the Half of It.”

Tom Sittema
CNL Financial Group’s CEO is founder and board chair of LIFT Orlando, a poverty housing program, as well as a leader with Florida Citrus Sports and the Orlando Economic Development Commission.

Scott Skiles
The fan favorite from the Magic’s early years returns as head coach, and the expectations for instant improvement (and playoffs) are through the roof.

David Swanson
First Presbyterian’s pastor has taken a leading role in finding solutions for homelessness. The church feeds about 200 homeless every Sunday and recently commissioned a “Homeless Jesus’’ public-art sculpture to draw attention to the issue.