Jeffrey Miller
Lawyer, Activist »Age: 63
Maines owns one of the top interior design firms in the area, and Miller’s law firm has served the area for two decades. But this downtown power couple continues to gain in stature primarily through their involvement in numerous political and social causes—and their generosity. Some of the organizations that benefit from their board memberships and/or monetary support include the Orlando Ballet, the Holocaust Memorial Resource and Education Center of Florida (Miller is board chairman), and the Orange County Library System (Maines is board president). They have served on numerous committees helping plan fundraising galas for organizations that include the ballet, Nemours Children’s Hospital and Hope & Help of Central Florida (Headdress Ball). Politically they lent support to Charlie Crist’s bid for governor, holding three fundraising events, two in their home, and have also raised money for Rep. Alan Grayson. They are active in promoting anti-bullying campaigns and marriage equality, and in the past year achieved a momentous milestone in the latter area: Maines and Miller were legally married.

32 David Simmons
State Senator »Age: 63
As chairman of the powerful Senate Rules Committee, Simmons controls when and what legislative proposals are heard. The Altamonte Springs Republican was appointed to the post by Senate President Andy Gardiner, a close friend and political ally. The two have charted a steady course for the Senate, most of whose bills pass unanimously. But both also have been at odds with the defiant, Republican-controlled House on accepting federal money to expand Medicaid for Florida’s uninsured residents—and a state operating budget. So far this year, Simmons sponsored and passed domestic violence and Internet “revenge porn” legislative reforms, and he is working to further protect the environment and improve education. Simmons also serves as financial managing partner for the Orlando-based law firm of deBeaubien, Knight, Simmons, Mantzaris & Neal. 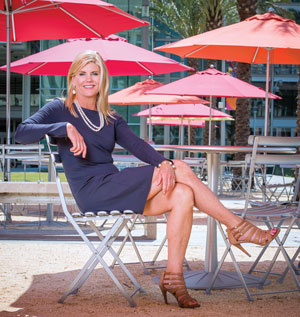 Guiding a Downtown Jewel From Dream to Reality

That gives you an apt visual for her selection to the “Most Powerful” list. The process of creating the center wasn’t always pretty, nor is it finished yet. But Ramsberger has clearly emerged at the top of the heap as arguably the single most important figure on the Central Florida arts scene.

Chosen by Mayor Buddy Dyer to help turn the idea for a world-class performing arts center into a reality, she spent eight years researching other performing arts centers; collaborating with civic leaders and architects to come up with a suitable plan; then weathering funding snags, construction delays, and civic and artistic bickering on the way to finally opening the center last November.

It was all on-the-job training for Ramsberger, whose previous work experience was in design and marketing. Once the center was completed last November, the task of running it might have reasonably been turned over to a manager with a track record of operating such facilities. Instead, the resolute, single-minded multitasker has segued from dreamer to doer.

The game-changing, $514 million cultural hub she now stewards has two theaters, one performing arts school and a mission of making arts and artistic advancement available to all. She commands a salary and bonuses of more than $350,000 and manages a staff of 64 full time and 130 part-time employees, with an additional 455 volunteers.

The center is her obsession, and as you might expect of someone charged with operating an enterprise she helped to create, she has been a vigilant micromanager. Several employees, including five vice presidents, have quickly come and gone on her watch.

“She is a very dynamic lady and sometimes it’s her way or the highway, but so far, we have backed her on that. She’s got a good batting average, and that’s what matters,” says former Orlando Mayor Bill Frederick, a member of the Dr. Phillips executive board.

“She has both great vision and a tremendous ability to manage the little things, and her staff listens very carefully to what people are saying about the center,” says Rita Bornstein, President Emerita and Cornell Professor of Philanthropy and Leadership at Rollins College and also a member of the executive board.

Shows have sold out with regularity, from touring Broadway productions such as Newsies and Pippin to individual artists such as Harry Connick Jr. and Diana Ross. There’s a long line of local groups vying for a chance to rent out the smaller of the center’s two theaters, often at a reduced rate. There are roughly 150 requests per month to use the center for special events, such as weddings, awards ceremonies and galas. Classes at the center’s performing arts school—two dozen are offered—have filled up quickly.

“We’re a growing business,” says Ramsberger. “We’re watching very carefully how our customers are responding, what it is that they want more of. What makes us very happy is how much they love to be here. We have a line of people waiting to get in early when the doors open up for a show, and they’ll stay late, enjoying a drink afterward.”

Though blessed with the looks and having developed the steel suitable for a lead in a film noir thriller, Ramsberger avoids the spotlight herself in favor of keeping the focus on the mission—or as Bornstein says, slightly exaggerating: “She doesn’t have a personal life.“ She does have two college-age sons, a penchant for winning the office pools in both football and basketball, and a love of snow skiing.

The next step: the addition of a long-awaited third performance space to the center—a 1,700-seat, $184 million acoustic hall for ballet, opera and theater. It will be named Steinmetz Hall, in honor of local philanthropists Chuck and Margery Pabst Steinmetz, whose recent $12 million gift will help make it possible for the theater to open in 2019.

34 David Siegel
President/CEO, Westgate Resorts »Age: 80
David Siegel is back. After the collapse of Wall Street’s Lehman Brothers investment bank in late 2008, financing for Siegel’s Westgate Resorts time share company dried up. That led to thousands of employee layoffs, the forced sale of his PH Towers Westgate in Las Vegas, and a halt to construction on his 90,000-square-foot Versailles mansion in Windermere. But with the time share business rebounding from the recession and Siegel avoiding dependency on financial institutions, he has rehired many employees, reaching 10,000 and with an eye on expansion. Last year, Siegel bought the Cocoa Beach Pier for $7 million and the Las Vegas Hilton for an estimated $160 million. Siegel also purchased the Orlando Predators Arena Football team for an undisclosed amount and moved the team from the CFE Arena on the UCF campus back downtown to the Amway Center.

35 Deirdre Macnab
Former President, Florida League of Women Voters »Age: 59
Although she is the league’s outgoing state president, Macnab continues to build the next generation of Florida leaders within the organization. From fighting bad laws to pushing for affordable health care for 800,000 uninsured Florida residents and the mentally ill, Macnab has continued to challenge the Republican-controlled Legislature. She’s also been an advocate for more discussion on climate change, and she and the League have fought to keep concealed weapons off of university campuses; monitored use of Amendment 1 funding for the environment, passed by 75 percent of the voters last year; and worked to enforce amendments to stop gerrymandering and the rigging of candidate choices for voters. The League successfully helped pass online voter registration, which awaits the governor’s signature to become law. Given all of her activity, we wouldn’t be surprised to see Macnab make a run for elective office.

36 Chuck Whittall
President, Unicorp National Developments Inc. »Age: 49
Whittall has made his mark in a big way the past year, with the opening of the I-Drive 360 project and its 400-foot-tall Orlando Eye observation wheel, Sealife Aquarium and Madame Tussauds wax museum. The Winter Park native also was responsible for bringing the first Trader Joe’s and Shake Shack to Central Florida (in Winter Park), with a second TJ’s opening recently in the Dr. Phillips area. Whittall also is building a retail and restaurant space at the site of the former Mount Vernon Inn in Winter Park. Still on tap are numerous other developments, including two in the Disney area: a 115-acre project at Horizon West to include a single-family housing, apartments and a shopping center; and a 500-home project near Ruby Lake.

37 C. David Brown II
Attorney and Chairman, Broad and Cassel »Age: 63
Since 2000, Brown has served as the chairman of Broad and Cassel, one of Florida’s biggest law firms. He has been a longtime GOP fundraiser for former President George W. Bush and his brother, former Gov. Jeb Bush. Brown again is part of Jeb’s fundraising team for a 2016 presidential bid. He remains a key player on land development around Central Florida, including Medical City. He serves on the Board of Directors for CVS Health; Orlando Health; and Rayonier Advanced Materials, a Jacksonville-based worldwide manufacturer of fiber and chemicals. Brown sits on the nonprofit, nonpartisan Florida Council of 100, a group of business leaders working with state government promoting economic growth. He also served on the University of Florida’s Board of Trustees in recruiting new school President Kent Fuchs.

38 Andrae Bailey
CEO, Central Florida Commission on Homelessness »Age: 38
In his two years on the job, Bailey has worked to dispel myths about the homeless, including that they choose to live on the street and should be able to figure out how to help themselves. The Rethink Homelessness campaign has 30,000 followers on social media and featured a “Cardboard Stories’’ video, in which individuals wrote snippets of their lives, such as “I was a personal trainer’’ or “I am a computer geek.’’ (The video has received 6 million views on YouTube.) By sharing the personal stories of homeless individuals with community leaders, Bailey has gotten them on board with the idea of housing the chronically needy, patterned after a program in Houston. A $6 million commitment from Florida Hospital is a big step toward getting that done.

39 Scott Maxwell
Columnist, Orlando Sentinel »Age: 43
When Florida Sen. Marco Rubio wrote a May Sentinel Op-ed piece on the new VA Hospital, Scott Maxwell pounced. “Rubio was parachuting in to tout the opening of a big new center—one he didn’t have jack-squat to do with making a reality,” the columnist wrote in his trademark pointed style. Maxwell’s sharp analysis of Florida’s often dysfunctional government operations has made him a fixture in Orlando. His voice-of-the-people approach spotlighted corruption within the Orlando-Orange County Expressway Authority, resulting in two prosecutions and a panel revamping. His crusade for local police to purchase body cameras—to increase accountability in use-of-force cases—also came to fruition this year. Maxwell also works with many nonprofit groups ranging from UCP of Central Florida to New Hope for Kids.

40 Deborah German
UCF Vice President for Medical Affairs; Founding Dean, College of Medicine »Age: 64
The UCF medical school continues to thrive at its Medical City location in Lake Nona, and German has been there from the beginning. The school’s enrollment has grown tenfold in the past six years and by the 2016-17 school year it expects to be educating 480 physicians-in-training. Meanwhile, the college has expanded UCF Health with Gateway at Lake Nona, in conjunction with Florida Hospital, providing faculty members as physicians at a facility where patients have access to primary care doctors and specialists under one roof. The medical school also was selected from schools across the nation to provide expertise in helping the University of the Virgin Islands build a new medical school.