11 Tom Williams
Chairman and CEO, Universal Parks and Resorts »Age: 67
The Hogwarts Express debuted exactly a year ago at Universal Orlando Resort’s Wizarding World of Harry Potter, and things have been speeding along for the theme park giant ever since. The Orlando-based Williams is in his 16th year at the helm of Universal parks worldwide, from Hollywood to Singapore. The eye-opening additions just keep coming at the Central Florida park: Harry Potter’s Diagon Alley, the Escape From Gringotts roller coaster and the Hogwarts train last July; a King Kong attraction called Skull Island set to open in 2016; the Loews Sapphire Falls resort, also scheduled to debut next year; and Volcano Bay, a water park planned for 2017. Universal also is teaming up with Nintendo to feature attractions at its parks based on video games, and is planning to build a $3.3 billion theme park in the Chinese capital of Beijing within four years.

12 Alex Martins
CEO, Orlando Magic »Age: 51
As Martins continues to rebuild a young Orlando Magic team with the No. 5 pick in the June 25 NBA Draft and new coach Scott Skiles, a popular former Magic player, the future looks brighter after three losing seasons. Off the court, Martins is busy with the Magic’s planned downtown $200 million Sports and Entertainment District project. But much of what Martins does is not seen by the public. He chaired the Orlando Community Construction Corporation, a nonprofit overseer of the downtown performing arts center. With the specter of budget overruns and construction delays threatening the November opening, Martins led the settlements with both sides, resulting in an on-time and largely on-budget opening. In April, the Orlando Economic Development Commission honored him with the James B. Greene Award for contributing to Central Florida’s prosperity. Martins was cited for winning support for the Amway Center, the 2012 Orlando NBA All-Star Weekend and long community service. He currently sits on the UCF Board of Trustees.

13 John Mica
U.S. Representative »Age: 72
The longtime Republican congressman has made a career overseeing transportation, aviation and government efficiency. For him, the beat goes on. In December, Mica was named chairman of the House Oversight and Government Reform Subcommittee on Transportation and Public Assets. That post will allow him to investigate abuse of taxpayer money in the Transportation Security Administration; the General Services Administration; and Housing and Urban Development, among others. Mica has been a key player in Central Florida transportation, assisting with the $2.3 billion Ultimate I-4 project; Orlando International Airport’s planned transportation hub that will eventually connect with SunRail; and funding for rail expansion to Osceola County. He also is trying to help secure more OIA expansion money. Mica continues to work to privatize federal air traffic controllers, TSA screeners and Amtrak passenger rail service.

14 Kelly Cohen
Managing Partner, Southern Strategy Group »Age: 41
Political campaigns. Economic development. City planning. Charitable work. Lobbyist and strategist Kelly Cohen, managing partner of the Orlando arm of Southern Strategy Group for the past 10 years, is seemingly everywhere. That includes involvement in Orlando City Soccer Club’s success; advising Mayor Buddy Dyer on his re-election campaign; and various local high-tech projects, including the Florida Advanced Manufacturing Research Center, a partnership with UCF, government and industry to attract global firms focusing on the next generation of smart electronic sensors. A lawyer by training, Cohen serves on the Orlando Economic Development Commission board of directors; works on Dyer’s Project DTO advising the city on its future livability; and is a key player in the downtown Canvs high-tech co-working space and the Orlando Tech Association. She also sits on the board of Nap Ford Community School. 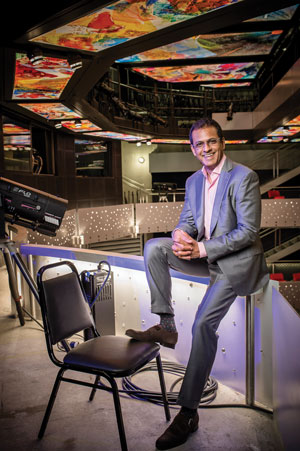 An Opportunity That Created a Game-Changer

15 Rasesh Thakkar
Senior Managing Director, Tavistock Group »Age: 53
​Sometimes opportunity knocks; sometimes it takes a free kick. How else to describe that life-changing moment, in 1987, when Rasesh “Sesh” Thakkar, the African-born son of an Indian accountant, fresh out of the University of Central Florida, accepted a soccer mate’s dinner invitation and wound up the protégé of a British billionaire.

What Thakkar took for a casual family dinner was actually a job interview. His buddy, Charlie Lewis, had flagged Thakkar as a respected friend. Charlie’s father, Joe, wanted to see for himself. Dinner begat tennis, and tennis turned to talk. During one such talk, Lewis made Thakkar an offer he couldn’t refuse.

“He said, ‘Sesh, let’s go into business together,’” Thakkar recalls, “and he pulled out of his pocket this little crumpled up, torn up newspaper ad.” The advertisement announced that the Resolution Trust Corporation (RTC), the government agency established to liquidate the assets of failed savings and loans, would hold its inaugural loan auction in Orlando.

“He says, ‘I love firsts. It’s probably a good opportunity. Let’s check it out.’ And that was it.”

They attended the auction together, but Lewis didn’t bid. Instead, he bought the unsold inventory afterward at the government’s “minimum reserve” price—the lowest acceptable bid.

“Because it was a first, it was an uneducated marketplace, so the arbitrage was decent,” Thakkar says. “We were in that market for about four years. We did well. And then we moved on to the next thing.”

That turned out to be SafeMark, an Orlando-based maker of hotel safes—the first to be manufactured in the United States. Lewis sold the safe company in the early 1990s and sent Thakkar to work with Charlie overseeing the family’s resort and distribution holdings in Argentina. Thakkar worked in London a few years before returning to Orlando in 2003, where he was placed in charge of Lewis’ real estate holdings.

It is at Lake Nona where Thakkar rose to prominence, rallying from a near-miss courtship of Scripps Research Institute to land the Sanford-Burnham Institute in an all-in recruitment initiative that engaged the region’s entire economic power elite. He replicated the formula successfully to draw more than $3 billion in investment, including the USTA (which will build the nation’s largest tennis training facility here), the hospitals, and the medical school, creating more than 4,000 jobs over the past decade.

There are currently 3,000 homes at Lake Nona and plans call for a total of 11,000 homes by 2026. All homes, by the way, have one gigabyte wi-fi, roughly 200 times the speed of the typical home wi-fi connection.

Thakkar’s full-on attitude extends to the community at large, where he was an early supporter of the “Build Them All. Build Them Now” public venues initiative.

“Sesh believes jobs are the lifeblood of any vibrant community,” says Rick Weddle, president and CEO of the Orlando Economic Development Commission. “He has repeatedly proven his commitment to the important mission of attracting key industries to our region, creating opportunities for our skilled labor force and providing the type of environment conducive to collaboration and innovation.”

Some who have worked with Thakkar describe him as impatient—a trait that he says he gets from his father. That bias for
action extends to matters of love. Thakkar and his wife, Windermere dentist Rupal Thakkar, met at an executive speed-dating event in Manhattan.

Impatience is a job requirement when working for Lewis, Thakkar says. Asked how that jibes with a project like Lake Nona, which is expected to be developed over decades, he says: “Our money is very patient.”

16 Jeff Ashton
Orange-Osceola State Attorney »Age: 57
Ashton has been busy over the past year, taking on violent criminals, politicians and even police. He successfully prosecuted the last three defendants accused in the 2011 hazing death of FAMU band member Robert Champion. He won a conviction in the case of former Orlando-Orange County Expressway Authority board member Scott Batterson on bribery-related charges, which resulted in a 7½-year prison sentence. That case capped Ashton’s 2½-year probe that led to an overhaul of the expressway board. In December, Ashton announced he would not prosecute court clerks who gave gay and lesbian couples marriage licenses, paving the way for legal unions. His recent prosecution of four Orlando police officers on excessive force charges led, in part, to the agency requesting officer body cameras. And he continues to retool the office he took over in 2013, now seeking county funds to help make his office paperless and more efficient.

17 Bill Nelson
U.S. Senator »Age: 72
The low-key Democrat from Lake Nona is in his third Senate term and continues to be a moderating voice in Washington, working with colleagues on both sides of the aisle. Nelson is the ranking member of the Senate’s Commerce, Science & Transportation Committee and a senior member of the Senate’s Armed Services, Finance and Aging Committees. He chaired a Commerce Committee probe of defective, exploding car airbags, resulting in 34 million recalls. The same committee also passed the first-ever regulations to keep liquid nicotine vials out of the hands of children and is pushing for full Senate and House approval. Nelson also helped pass a law stopping the unexpected closings of Social Security branch offices; obtained $125 million to battle against deadly citrus greening disease destroying fruit; and co-sponsored a measure to impose sanctions against Venezuela for human rights violations, resulting in the blocking of visas for two dozen officials.

18 Phil Rawlins
Founder and President, Orlando City Soccer Club »AGe: 56
What Rawlins and Orlando City have pulled off in the past year is nothing short of mind-boggling. First they signed soccer superstar Kaká to help usher in the Lions’ first year in Major League Soccer. After breaking ground on a 19,000-seat stadium, they sold 14,000 season tickets, third highest sales in the league. But the real attention-getter was the 62,510 fans who filled the Citrus Bowl for Orlando City’s MLS debut. By late spring, however, the club was facing two big issues: It might need a bigger stadium, and $30 million in public funding from the Legislature to help build it was looking decidedly doubtful. And so at a press conference in late May, Rawlins and team owner Flávio Augusto da Silva announced the club would pay 100 percent of the cost of the stadium and expand it to up to 28,000 seats. What to do for an encore? How about the playoffs in their expansion year? At our press deadline, the Lions had a realistic shot at it.

19 Craig Ustler
President/Owner, Ustler Development Inc. »Age: 46
Ustler’s name has become synonymous with Creative Village, the long-range high-tech mega-community planned for downtown. The project’s big news in the past year was the University of Central Florida committing to building a $200 million-plus downtown campus as part of Creative Village. However, state funding is needed for that, and when this issue went to press, the money was still tied up in the Legislature amid wrangling over Medicaid. In the meantime, Ustler’s team is getting busy with preliminary Creative Village projects, including a Lymmo bus line and related infrastructure work. Ustler’s other projects include the Ivy Apartments at Florida Hospital Health Village, which opened last fall, and the Residence Inn by Marriott hotel, set to open this month at Orange Avenue and Colonial Drive. Ustler’s restaurant ventures include the popular Soco in Thornton Park and the soon-to-open North Quarter Tavern, next door to his Citrus Restaurant on North Orange Avenue.

20 Frank Kruppenbacher
Attorney, Chairman of Greater Orlando Aviation Authority »Age: 62
As GOAA chairman, attorney representing several government agencies, a top Republican fundraiser and the local finance chairman of Gov. Rick Scott’s successful re-election campaign, Kruppenbacher is a major force in Central Florida. He continues to oversee the nation’s 14th busiest airport: GOAA’s $3 billion expansion calls for an additional south terminal and intermodal train center, which will link Orlando to a Miami-bound train. Kruppenbacher was ultimately responsible for securing a 50-year-lease extension between the airport and the city of Orlando. He headed a mission to Dubai resulting in direct flights from Emirates Airlines to and from Orlando, and worked to secure new flights to Cuba. His clients include Orange County’s property appraiser and clerk of courts; Osceola County; the city of Belle Isle; the Florida Virtual School and Bright House Networks. He also heads the children’s rights section at the Morgan & Morgan law firm and operates the For the Children charity for needy kids.