There’s something magical about Pom Moongauklang, who has helmed her little sandwich and tea shop on North Bumby Avenue for 13 years.

“I do love food,” she says, perched at the end of the counter with a twinkle in her eye. “I can cook everything; that comes from my mom. I get inspired by color, or a dream … That’s what I do, you get inspired and you cook. We have specials every day. I’m making Spam from scratch,” she says with a laugh. “I’ve been exploring a lot more.”

Pom has grown into and helped redefine this section of Bumby from a seedy outskirt to an area with identity and value. “You have to be with a community and give to a community.” She talks about sharing purpose with Beefy King, Bad As’s Sandwich, MX Taco and Stasio’s Italian Deli, and grins. “It’s now the Sandwich District … watch out, Milk!” she says, referring to the hiply coined Milk District.

“When we first opened, my menu was on a 5-by-7 card. We used to let customers build their own, just ‘Willy Wonka’ a sandwich. Now the menu is strong, and we partner desserts with CayCakes and  P is for Pie.” At almost that second, Ed Tomljenovich from P walks in with a bag of whoopie pies.

“My sandwiches don’t need a lot of stuff,” she says pointing to the “Billy Chang” of smoked brisket, blue cheese, strawberry jelly and red onions. “I like layers, of flavor, of color. When you open up one of my sandwiches, it should look like a layered cake. I don’t need four different sauces.”

As she says, the food is the food. But Pom is much more, a unique combination of flamboyance (“Orange is my mascot color”) and lack of pretense. “It’s so eclectic here, especially at 2 a.m., so Studio 54 in here. It’s the servers, and the art; you can talk to the server or just listen to conversations—eavesdropping is okay.”

That twinkle reappears. “I love this little place.” pompomsteahouse.com —J.H. 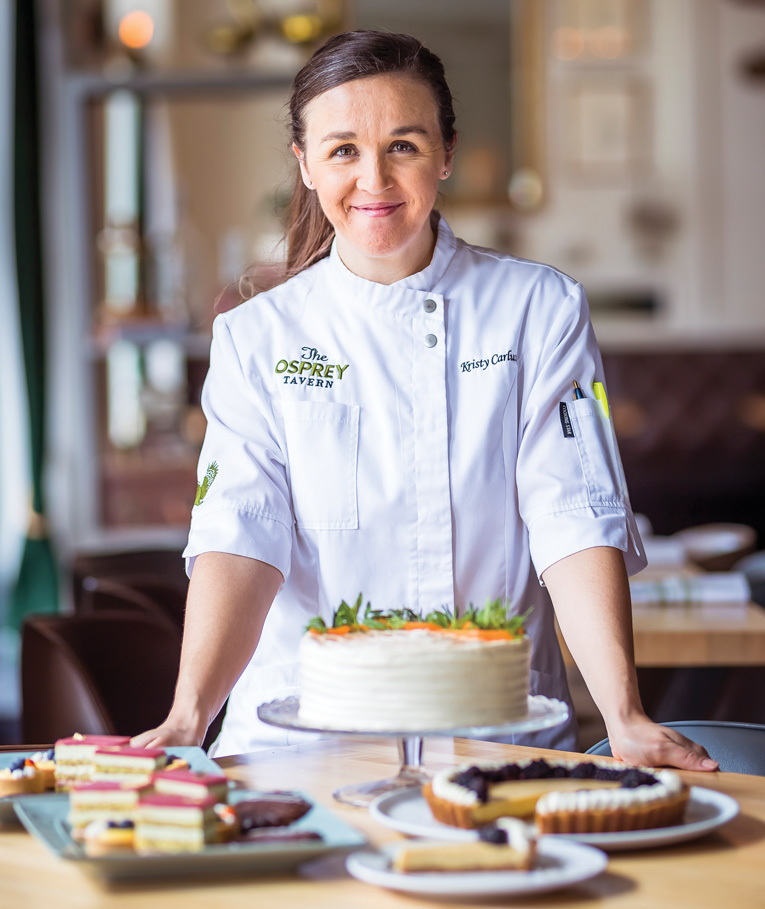 Pastry Chef at The Osprey Tavern

“I don’t have a sweet tooth,” says dessert queen Kristy Carlucci, who continues to push the after-dinner boundaries while still injecting a bit of fun.

“I’ve been baking since I was a kid,” she says. “My grandmother gave me my first baking book when I was 6; I would read it cover to cover—I made my first soufflé when I was 8. I would pull things out of her pantry and make stuff.”

Carlucci’s education at the Culinary Institute of America included an externship with one of the Gordon Ramsay-owned restaurants in Boca Raton. “You worked from 8 a.m. to 1 a.m. and you got screamed at the entire time.” Her local experience includes The Ravenous Pig, Cask & Larder and now more than four years as pastry chef at The Osprey Tavern.

Community is important to her, as evidenced by the “Pastry in the Park” events where she gathers other local dessert chefs for one sugar-filled evening. Her memorable creations include Peas & Carrots (carrot cake, sweet pea cake, carrot curd and brown butter ice cream), bubble gum ice cream and “something to do with radishes. I’m always trying to look for different things.” Baldwin Park; ospreytavern.com —J.H. 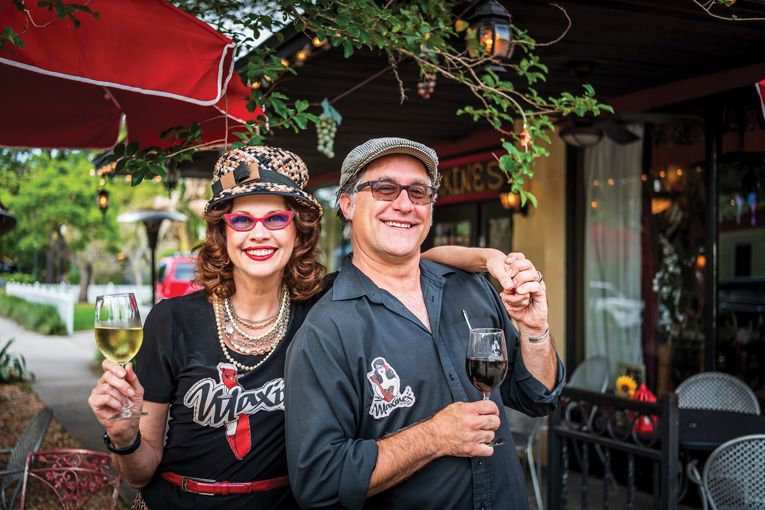 For Kirt and Maxine Earhart, there’s no separation between a good dinner and a good night out. In its seventh year, the little neighborhood bistro called Maxine’s has become an eclectic mix of dining— courtesy of local legend and 2013 Dining Hall of Fame Chef George Vogelbacher—  and  entertainment, music and art. “It’s all equally important,” Kirt says.

The mix at Maxine’s includes vaudeville shows, knife throwers, contortionists, belly dancers and drag show. There’s an ever-changing display of local art, a flow of singer/songwriters—and a menu featuring a much-respected cioppino stew and seafood from 50-year veteran chef Vogelbacher as a basis of their American neighborhood cuisine.

Kirt considers the place an extension of his living room. “I am merely the minstrel for elevation of good times,” he says. “People don’t want to come here for just food, they want to celebrate.” As Maxine tags it: “Sexy, comfortable and delicious.”

“Character” is a good word for Maxine’s. Maxine herself can be found “working the room,” her exuberant personality matched by a flamboyant sense of wardrobe. Kirt is the epitome of the good host, plying a new bottle of wine or breaking into extemporaneous poetry. There must have been a great cosmic alignment that allowed these two eccentric treasures to meet. Shine Avenue just south of Livingston Street; maxinesonshine.com—J.H. 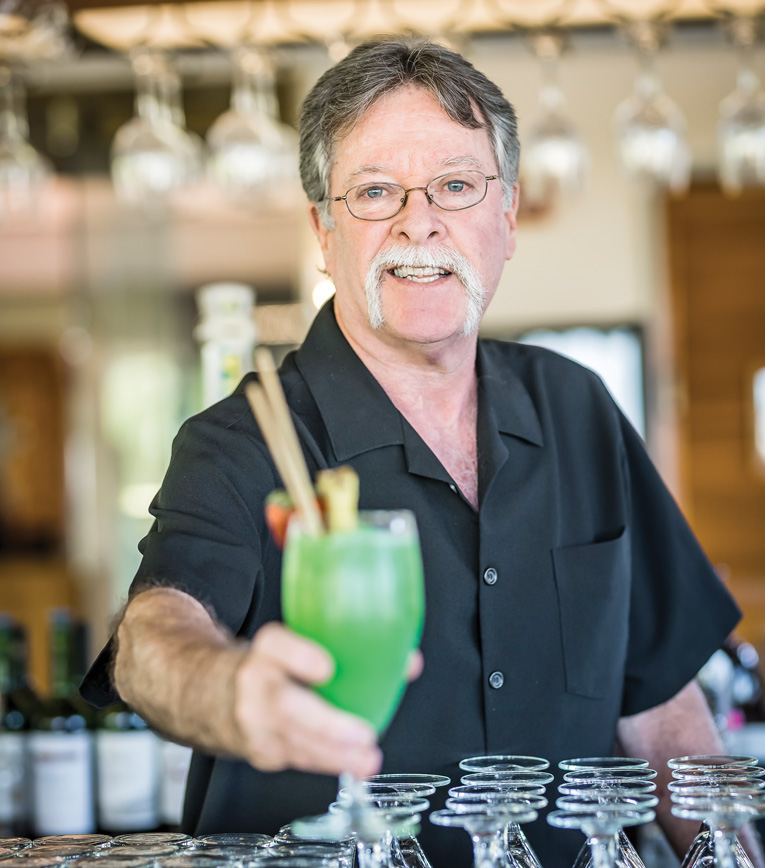 A veteran of 35 years at the Hyatt Regency Grand Cypress, Fred Rhode is so dedicated to service that he interrupted our conversation to get me a glass of water, unbidden. He reveals his secret: “Taking care of people, treat them like family and friends.”

Recruited from the venerable Church Street Station’s Cheyenne Saloon, Rhode helped open the award-winning Hemingway’s in 1984 and can be found behind the bar several days a week. His thumbprint is on many of Orlando’s prime locations: He opened the bars at Finnegan’s Irish pub at Universal, the Florida Hotel, Disney’s Grand Floridian Resort and other Disney properties, while still working at Hemingway’s.

“I always stayed here,” he says.

He has regular guests who arrive monthly and remembers others who revisit after several years, recalling their drinks and often where they sat. Rhode himself leans toward red wine, but talks reverently of the house specialty, the Papa Doble— spiced rum, Bacardi, orange and pineapple.

“Five years down the road when I retire,” he says, “I won’t retire. I’ll still come out here two days a week, see the people.” hemingwaysorlando.com —J.H.