18 Local Leaders in an Age of Crisis: John Mina and Orlando Rolon 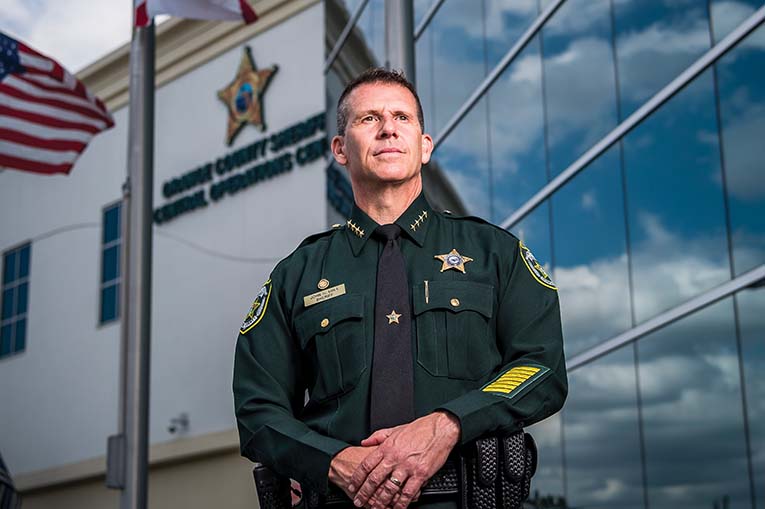 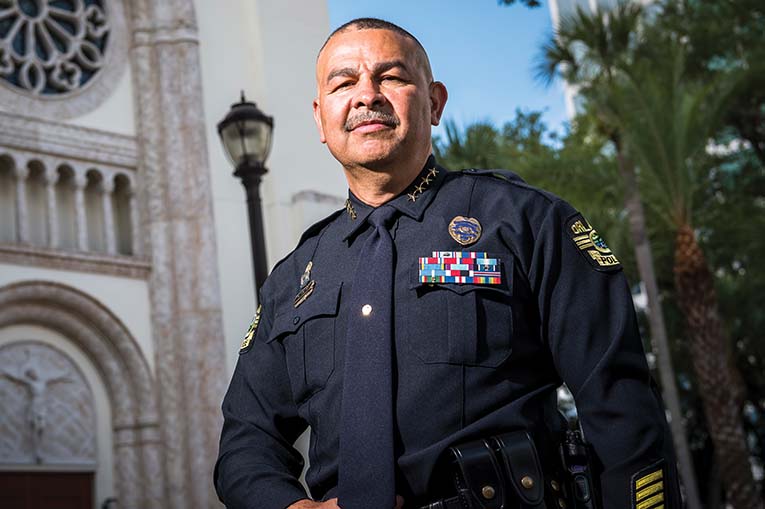 In the topsy-turvy year of COVID-19 and the explosion of the social justice movement, both John Mina and Orlando Rolon have faced big challenges—maintaining order, reaching out to communities, and maintaining morale within their respective departments.

For Mina, there was an additional task: re-election. He won the Democratic primary overwhelmingly in August, and the sheriff is expected to sail past two write-in candidates in November.

During the pandemic and shutdown of the Central Florida economy in the spring, most crime plummeted. Officers from both agencies then assumed a new role: assisting on COVID-19 patient emergency calls; enforcing nightly curfews; breaking up large groups gathering improperly or illegally operating businesses; and coordinating traffic and security at virus test centers, personal protective equipment giveaways and food distribution locations.

Unlike some police chiefs and sheriffs around the country who said the virus was a hoax, Mina says county leaders and his department and employees took the threat seriously from the beginning. “We all were on the same page,” he says.

Since taking office in a 2018 special election, Mina has tried to make the agency more progressive with increased community outreach, de-escalation training on use of force and harsher punishment for out-of-line deputies—especially in light of what may be a replay of the 1960s civil rights movement and unrest. His agency currently is under fire after a deputy fatally shot an armed fleeing suspect in the back at The Florida Mall in August.

In the wake of George Floyd’s death in Minneapolis, Mina took the bold step of requiring deputies to intervene if they see excessive force by another officer.

“The past six months have been a challenge for law enforcement and law enforcement leaders,” Mina says. “You definitely have to get in front of the messaging and listen to the community. We can’t be afraid to change things, but also have to listen to our deputies and staff wants and needs.”

During one event this summer, Mina and Rolon marched with Black Lives Matter protesters, knelt, held hands and prayed. (Rolon says they agreed to pray with two demonstrators on multiple issues including domestic violence, child abuse and police brutality.) The move angered officers in both departments.

“I’m not going to apologize for trying to reach out and show some solidarity and saying, ‘Hey, you know what, we’re all in this together,’ ’’ Mina says. “What I’m trying to get away from is this us-versus-them mentality on both sides.”

In July, a sheriff’s union survey showed more than 500 deputies voted to rescind the union’s campaign endorsement for Mina, citing low morale, harsh disciplinary actions and concerns over his administration not supporting them in cases where force is used. A similar survey of 350 Orlando Police officers also cited low morale and lack of confidence with Rolon, especially in use-of-force situations. They accused him of playing politics instead of protecting his officers. Both leaders disputed the survey results.

“It’s the first time in the history of the department we had eight straight significant days of protest,” Rolon says of the marches over racial justice. “During COVID and the demonstrations, we’ve been very flexible. …I recognize this was a time to listen. We needed to be accommodating [to marchers] or otherwise it would have been a catastrophe.”

Most protesters were law abiding and protected by officers, but OPD was forced to use tear gas and pepper spray on disruptive demonstrators who refused to disperse late at night. More than 100 arrests were made. In most cases—those where officers were not battered—the city did not pursue charges beyond jail time served. One march had an estimated 10,000 demonstrators; the city is a favorite location because of its parking availability and proximity to courthouses, police agencies, government buildings and Lake Eola, Rolon says.

One major obstacle was misinformation spread on social media, which Rolon says police agencies need to do a better job countering—as well as explaining how officers do their jobs. And the Orlando Police Department has changed its policies and training on use of force and banned no-knock search warrants.

“When people want to make a statement, they want to make it in Orlando,” Rolon says of the George Floyd protests. “It was a protest against the profession, not specifically the Orlando Police Department. This was a time to listen, and we’ve tried to be responsible about change.”

This article appears in the October 2020 issue of Orlando Magazine.
Categories: Home Page Features, News and Features
Tags: John Mina, Orlando Rolon
Want to read the whole issue? Download and read this issue and others on Magzter.