18 Local Leaders in an Age of Crisis: Buddy Dyer 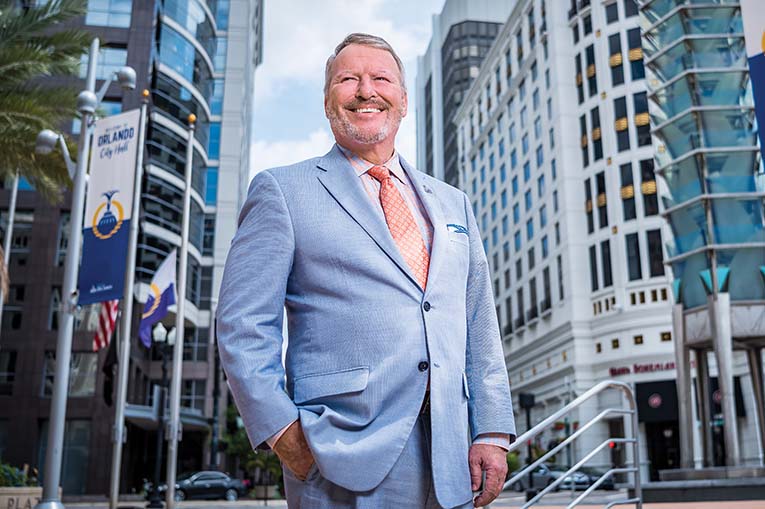 A year ago, Buddy Dyer ran as “the Happiest Mayor in America,” winning a fifth term with 72 percent of the vote and his widest victory margin during his 17-year-reign as the city’s longest- tenured leader.

But the coronavirus pandemic has created unforeseen problems affecting residents, tourism, the airport, the broader economy—and even the future of downtown. With most companies allowing employees to work from home, will they ever return to downtown high-rise buildings and surrounding businesses?

Even Dyer is working a lot from home through Zoom conferences and virtual ribbon-cuttings.

These days, “I don’t think you can find any happy mayors,” says Dyer, a Democrat. “It’s not a happy time for mayors. Mayors are hunkering down and doing their jobs. All the fun stuff you do as mayor is gone.”

Even after handling major emergencies such as hurricanes and the Pulse nightclub shooting, Dyer has found COVID-19 to be  a mind-boggling enemy.

“We had a different answer every hour [in the beginning]. . . .We just don’t know what the long-term effects are,” he says. “I’m proud of the fact that we took it seriously.”

After conferring with medical experts at Orlando Health and AdventHealth, Dyer banned alcohol sales at bars on St. Patrick’s Day—effectively shutting them down as potential high-risk virus-spreading sites—before Gov. Ron DeSantis and the county followed suit. Urging residents to stay at home and wear masks also was important, and Dyer was one of the first elected officials to use a face covering in the normal course of business.

Dyer worked seamlessly with Orange County Mayor Jerry Demings, and nightly curfews followed in late March. The two mayors were the chief voices of calm in daily press conferences about the virus. Dyer says feedback from constituents showed they were reassured and appreciated guidance on how to handle the pandemic and be safe.

Working with Demings was “perfect,” Dyer says. “He’s very deliberate, transparent. The relationship between the city and county has never been better.” It also didn’t hurt that some of Demings’ top lieutenants formerly worked for Dyer and joined the county mayor after his election, making interactions with the city smooth.

And then came the social justice movement following the May 25 death of George Floyd at the hands of Minneapolis police. Several protest marches followed in downtown Orlando, including one with an estimated 10,000 people. On another occasion, protesters even met Dyer outside his home to talk.

Since then, he has participated in more than 30 Zoom conference calls with protesters as well as nonprofit and faith community officials to try to promote understanding and equality.

“Think about this. On one of those Saturdays where we had the biggest protest, we were still in the grips of the first wave of COVID. We had thousands of people that demonstrated in downtown,” Dyer says. “And that was the night we had tornadoes (in the city limits.) We had three things that had never happened before in my life.”