16 Old and New Books To Help You Escape

Books are our portals to other worlds, new and old, familiar and strange. 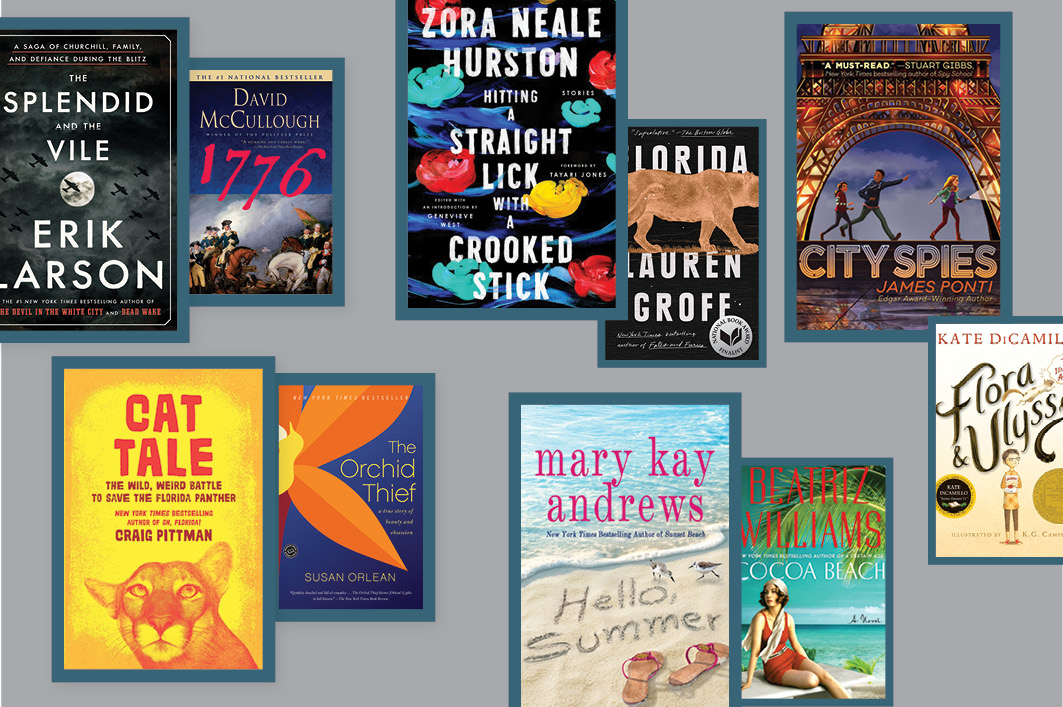 Prepare to escape. Here are eight new books, each paired with an older title in a similar vein. There be dragons—or panthers. Love and romance. Turning points in history. And the weirdness that is Florida.

Most Floridians won’t get any closer to a Florida panther than the picture on a specialty license plate, or by donning an NHL jersey for the Miami-based team. That the elusive animals are still around in the wild is something of a miracle, as environmental reporter Craig Pittman recounts in Cat Tale: The Wild, Weird Battle to Save the Florida Panther. After real estate developers eliminated acres of wilderness where the panthers once roamed, the big cats were on the brink of extinction. Then conservation advocates and wildlife biologists joined together to battle bureaucracy and politics to save Florida’s state animal.

Susan Orlean’s 1998 narrative nonfiction book The Orchid Thief grew out of a 1995 article she wrote for The New Yorker that was rooted in Florida horticulturist John Laroche’s arrest for poaching wild orchids on Seminole land in South Florida. Intrigued by the eccentric Laroche’s motives—he wanted to both clone rare ghost orchids for commercial use and make a case for their protection—she traveled to the Florida swamps to chronicle his obsession and the strange subculture of orchid breeders and flower-sellers. The book is discursive, personal, fascinating. Also, alligators.

Central Florida author and producer James Ponti launches an entertaining new series for middle-graders with City Spies, in which a group of orphans from around the world become secret agents. Sara Martinez, aka Brooklyn, is headed to juvie for hacking into the New York City foster care system when she is recruited by the British spy “Mother,’’ who poses as her attorney. Soon, Sara and her teammates are using their unique skills on a mission to an international youth summit in Paris.

Sometimes excitement happens closer to home, as in Kate DiCamillo’s 2013 Newbery winner, Flora and Ulysses: The Illuminated Adventures. When obsessive comic-book reader Flora Belle Buckman rescues a squirrel that has been swallowed by a vacuum cleaner, she discovers the now-not-so-furry creature has somehow gained the superpowers of strength, flight and poetry-writing. Holy bagumba! DiCamillo’s droll narrative is nicely complemented by K.G. Campbell’s illustrations and cartoon panels. Ulysses, named after the vacuum cleaner model, is a superhero for the ages.

Heart of the Matter

In these disconcerting times, Lily King’s novel Writers & Lovers is the book you didn’t know you needed—the witty, hopeful story of Casey, a young writer and waitress, who is struggling to finish her first novel while grieving for her late mother. Two men complicate her life’s plot. Oscar is an older, well-known writer, a widower with two winsome little boys. Silas is younger, a student of the first, and still improvising his life and work. Oscar or Silas? Silas or Oscar? I’m rooting for Casey.

Ah, love. It suffuses the pages of Love in the Time of Cholera, Gabriel Garcia Marquez’s richly romantic 1998 novel set in an unnamed Latin American city. Florentino Ariza nurses a grand passion for the lovely Fermina Daza for more than 50 years. She sends him away when she is a young woman and instead makes a good match with a doctor, Juvenal Urbino. After the doctor’s death, which occurs near the beginning of the story, Florentino Ariza re-enters the widow’s life. At this point, Garcia Marquez takes us back in time and chronologically recounts the saga of the three lovers. The language is eloquent, the metaphors extravagant, the mood ebullient. Love can be courtly, like Ariza’s letters. But it also can be all consuming, like a fever.

Popular historian Erik Larson, who has written about hurricanes, serial killers and warships at sea, now turns his attention to Winston Churchill and Britain’s “finest hour’’ in The Splendid and the Vile. Drawing on recently declassified files and personal diaries, he details Churchill’s first year in office, which began in May of 1940, as Hitler invaded Holland, and continued through the months of the Blitz. Churchill’s charisma, resilience and diplomatic skills are on full display as he tries to convince Roosevelt and the U.S. to join the war effort, but Larson also reports on the actions and conversations of Churchill’s family members and assorted colleagues and aides. An intimate and fast-paced wartime drama.

George Washington’s leadership comes into focus in David McCullough’s stirring 1776, a history of the early events of the American Revolution that McCullough wrote as a companion to his prize-winning biography John Adams. Washington’s ragtag troops struggle and persevere, but the British are not overlooked, from the Redcoats to King George III. This is military history at its finest.

Hitting a Straight Lick with a Crooked Stick, released in January, collects 21 short stories written by Zora Neale Hurston between 1921 and 1937. Written in regional vernacular and shaped by Hurston’s background as a folklorist and anthropologist, they display her observational skills and sense of humor. Most follow the everyday lives of black people in Eatonville, where Hurston grew up, and Harlem, where she studied and wrote in the 1920s. Sometimes characters move between the two settings, as in “The Country in the Woman,” about an Eatonville couple who migrate north. In the earliest story, “John Redding Goes to Sea,” a young man dreams of leaving Florida to travel the world.

In her 2018 collection of stories, Florida, Lauren Groff depicts the state as a “dangerous Eden,’’ beautiful but with an air of unease, even menace. In “The Midnight Zone,’’ a concussed woman imagines herself as a panther slipping through the shadows.  In “Eyewall,” a widow decides to stay in her house during a hurricane and is visited by spirits as the storm smashes down like a fist. And in “Ghosts and Empties,” the nameless narrator is both watcher and watched as she paces through her gentrifying neighborhood in the early evening.

Readers first met the Logan family of Mississippi in Mildred D. Taylor’s 1975 historical novel Song of the Trees, which was followed by Roll of Thunder, Hear My Cry. Now Taylor brings the story of the Logan family—which is also the story of the civil rights movement in the 20th century—to a satisfying conclusion with a fifth book, All the Days Past, All the Days to Come. Cassie Logan graduates from college and leaves the post-World War II South, first for Ohio, then California. Years later, she goes to law school in Boston before returning home to Mississippi to register voters. Sweeping social change becomes personal in Cassie’s intimate narrative, which is like Skyping with your kin.

The graphic novel format proves a perfect way for Congressman John Lewis to recount the struggle for civil rights and his own remarkable life story. The trilogy March, written in collaboration with co-writer Andrew Aydin and artist Nate Powell, encompasses Lewis’ growing up as the son of an Alabama sharecropper, his meeting and friendship with Martin Luther King Jr., his beating by state troopers at Selma, the 1963 March on Washington, and his rise as an influential political leader. March was inspired by a 1958 comic book about King and the Montgomery Bus Boycott, and a young Lewis is seen reading it in this book.

Summer wouldn’t be summer without a tote bag full of beach books. First up is Mary Kay Andrews’ Hello, Summer, which mixes small-town secrets, scandals and romance into an appealing froth. When reporter Conley Hawkins’ exciting new job in D.C. ends before she can even move from Atlanta, she has to backtrack to her sleepy North Florida hometown. Once again she’s working for her older sister at the struggling family weekly, The Silver Bay Beacon, charged with writing the local gossip column, “Hello, Summer.’’ But then a local congressman and war hero dies in an accident, and Conley’s investigative reporting skills kick in. Extra, extra! Read all about it!

Beatriz Williams’ 2017 historical novel Cocoa Beach offers mangroves, mosquitoes and plenty of heat—there’s no AC in 1922, which is when Virginia Fitzwilliam arrives in Cocoa with her toddler daughter to inherit her estranged husband’s estate and shipping business. Not one to play the little widow, Virginia begins asking about Simon’s death in a fire at his seaside villa and poking into his business affairs. Everybody, even Virginia, has secrets to hide in this exotic Prohibition Era setting, where rum-runners make fortunes, and rogues are more than ready to sell swampland to unwary dreamers.

Out of This World

There’s whimsy and wisdom to be found in The House in the Cerulean Sea, a new fantasy by TJ Klune. A lonely, lowly caseworker for the Department in Charge of Magical Youth, Linus Baker is just following orders when he’s asked to evaluate the Marsyas Island Orphanage at the back of beyond. But Linus is intrigued by the extraordinary children he meets, including a little gnome girl, a boy who turns into a dog when startled, an unusual blob child who wants to be a bellhop, and a boy called Lucy, short for Lucifer. He also connects with orphanage director Arthur Parnassus, who will do anything to save his young charges, even though the fate of the world teeters in the balance.

The title story in Ken Liu’s stellar collection The Paper Menagerie won the triple crown of speculative fiction awards (Nebula, Hugo, World Fantasy) in 2012. In the poignant tale, a Chinese-American boy grows up playing with the magically animated origami animals his mother created. Other stories also play with questions of identity. In “State Change,” a woman carefully guards an ice cube she believes embodies her soul. In “The Perfect Match,” Sai begins to question the power of his electronic personal assistant, Tilly. And in “The Bookmaking Habits of Select Species,’’ exotic extraterrestrials find unique ways to pass on their wisdom through the ages, from stone brains to texts written in the stars.

E-books to the Rescue!

Thanks to ever-evolving technology, e-books can be read not only on dedicated e-reader devices such as Kindle and Nook, but also on computer devices with controllable screens, including desktops, laptops, tablets and smartphones. The books are published in various proprietary formats—epub, Kindle and PDF—and free reading apps are available from online retailers, including Amazon, Barnes & Noble, Apple and Google.

Public libraries use apps like Overdrive, Libby and Hoopla to lend thousands of free e-books and audiobooks to readers. The best way to get started is to go to the website of your local library: Orange County, Maitland, Winter Park, Seminole County, Osceola County. Each has clear directions about how to get a library card online and borrow digital materials 24/7.

Several online services, including Book Bub and Early Bird Books, also offer e-books for free or discounted prices. Project Gutenberg is a library that offers 60,000 free e-books that are in the public domain —older titles no longer in copyright. (A company called Internet Archive is advertising a “National Emergency Library,’’ but it has been condemned by the Authors Guild for including numerous copyrighted titles in its catalog.)

Nancy Pate is a local reader, writer and former book critic of the Orlando Sentinel. Check out her blog, “On a Clear Day I Can Read Forever,” at patebooks.com

This article appears in the May 2020 issue of Orlando Magazine.
Categories: News and Features
Tags: 1776, All the Days Past, All the Days to Come, book bub, books, Cat Tale, city spies, Cocoa Beach, Flora and Ulysses, Florida, Hello, Hitting a Straight Lick with a Crooked Stick, hoopla, libby, Love in the Time of Cholera, March, Overdrive, recommendations, summer, The House in the Cerulean Sea, The Orchid Thief, The Paper Menagerie, The Splendid and the Vile, writers, Writers & Lovers
Want to read the whole issue? Download and read this issue and others on Magzter.