Heather Grove is slightly obsessed with Siberian kale, ladybird beetles and mushroom composting—all for good reason. She’s part of the team that developed Fleet Farming, a bicycle-powered urban-farming program based out of Orlando’s East End Market that’s been picking up steam for the past 17 months.

During a typical week, Grove spends at least 30 hours weeding, harvesting, processing and selling produce. And that doesn’t include her day job as the market’s community manager.

Basically Fleet Farming involves finding residents willing to have a small garden planted in their yards, having volunteers bicycle to the garden to tend it twice a week, and then transporting the bounty to market via pedal power. 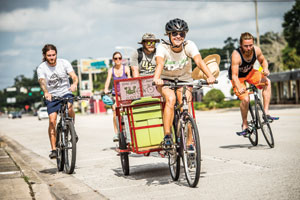 “It’s amazing how much you can grow in a small space,” says Chris Castro, founder of the local nonprofit IDEAS
for Us, parent group of Fleet Farming and Grove’s farming colleague. “We are so dependent on fossil fuels, especially for agriculture; it’s mind boggling. By making this bike-powered, it could become zero emissions.”

Currently Fleet Farming has 10 “farmlettes,’’ all a quarter-acre or less and most within a mile of its headquarters at East End Market on Corrine Drive. It hopes to have 15 by year’s end. The homeowners who donate their land can eat what they like from the garden—although Grove says it usually ends up being less than 5 percent of what is grown.

Once harvested, the produce is processed at East End Market’s incubator kitchen. It is then sold to merchants and chefs, including those at East End like Fatto in casa, Local Roots Farm Store, Txokos Basque Kitchen, and Farm-Haus. Fleet Farming also sells the produce at the Audubon Park Community Market every other Monday, April-September, and every Monday, October-March.

Proceeds go back into the program for future expansion, covering the cost of compost, irrigation, seeds and more. This fall Fleet Farming hopes to be able  to hire two part-time employees, including a farmlette manager.

For now, though, volunteers do the tending, no gardening street cred needed. They include Danny Delahunt, 29, a Full Sail student who on a recent Sunday morning is working in East End’s garden gently trimming arugula and neon-green sorrel.

“Don’t be afraid to give them a good haircut,” Grove says as she demonstrates.

Nearby, James McCully, 29, and his brother Ryan, 24, who have been gardening for about four months, are pulling giant carrots out of the ground.

Soon the group hops on bikes and pedals across Corrine to visit a few of the farmlettes. At the first stop weeds are pulled and lettuce is harvested and placed on a cart attached to a bike. At a second garden, the center of attention is a foot-long zucchini that is quickly harvested and added to the bounty.

Recently, Fleet Farming added a “Fleet Fruit’’ component whereby locals can donate the produce from their fruit trees that would otherwise rot on the ground. Fleet Farming picks the fruit and sells it. Homeowners get a receipt in return for purposes of a tax writeoff.

Interested in joining the fleet? Go to fleetfarming.com for details. +

This article appears in the July 2015 issue of Orlando Home and Garden.
Categories: Gardening