Space Coast Getaway: We Have Liftoff

Central Florida’s Space Coast is fired up with new attractions for visitors and residents alike.

If you didn’t grow up going to the Space Coast beaches, there’s a chance you haven’t visited the coastal region just an hour east of Orlando since the last space shuttle launch in 2011. But with the opening of the much-touted Heroes & Legends exhibit at the Kennedy Space Center Visitor Complex late last year, a new display at the Brevard Zoo that features kangaroos and Komodo dragons, and the revitalized Cocoa Beach Pier, now is the time to linger and explore.

Heroes & Legends. What is a hero? The first major attraction at KSCVC since the awesome Space Shuttle Atlantis exhibit debuted in 2013 delves into the successes and failures of our early space missions—the Mercury, Apollo and Gemini—and the character traits of our pioneering astronauts. With the addition of Heroes & Legends, KSC has organized its mission zones based on each era of the space program, from its fledgling flights and beyond with top-secret SpaceX and Boeing projects underway in the high-tech garages formerly used by shuttle orbiters. 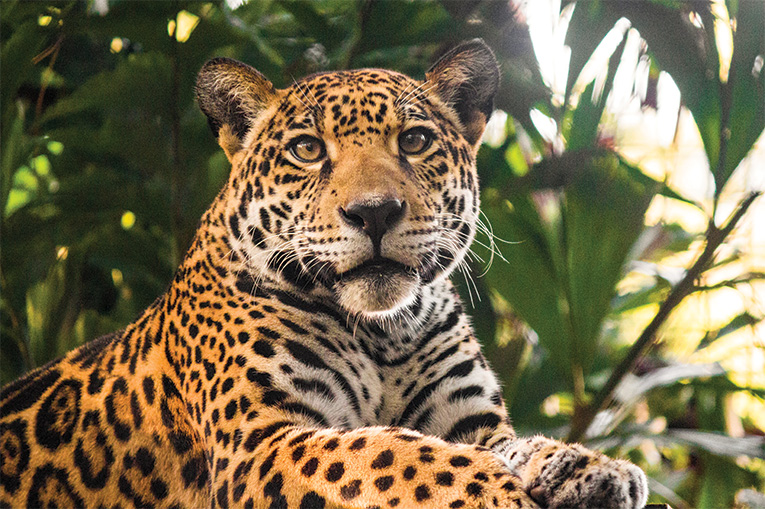 At the Brevard Zoo, a jaguar may pass overhead on a bridge between enclosures (BREVARD ZOO).

Orlando-based, themed entertainment company Falcon’s Creative Group helped bring the attraction to life with their deft use of technology. The 4D movie is virtual reality, with the glasses, and it is designed to make audience members feel as if they are reliving the astronauts’ experiences through their eyes.

Afterward, explore the nine interactive pods, each incorporating interviews with astronauts and their families with personal memorabilia to illustrate a character trait attributed to heroes: passionate, curious, tenacious, confident, inspirational, disciplined, selfless, courageous and principled. Another technological feat is a hologram exhibit that brings to life the peril of Gene Cernan’s spacewalk on the Gemini 9A that led to astronauts being trained underwater to experience weightlessness.

The visit ends in the all-new Astronaut Hall of Fame, relocated from its former off-site location, where you can take a selfie with your choice of a life-size projection of any of the Mercury 7 astronauts listed on a control console. 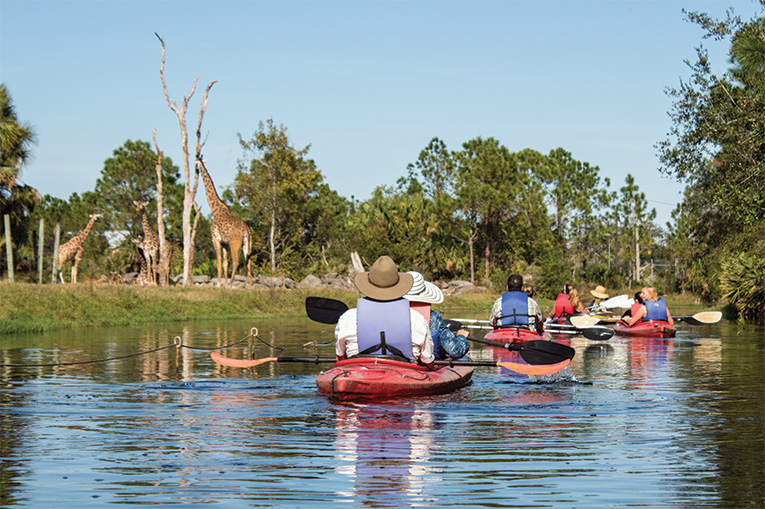 Paddle down a river in the Africa exhibit as giraffes graze on the shore (BREVARD ZOO).

There’s more than you can possibly visit, explore, learn and experience at KSCVC in one day, making an $89 annual pass (which includes free parking) a bargain, and giving you a reason to return to the Space Coast again and again.

Brevard Zoo. Did you know that you can kayak around Africa? That is, you can at the Brevard Zoo in Melbourne. For 30 minutes, you can paddle past grazing giraffes and curious lemurs at this independent, community-built zoo that is small enough to see everything, but large enough to enjoy a wide range of animals that represent different regions of the world.

In South America, a jaguar may laze overhead on a wooden bridge between enclosures; in Africa, a mob of meerkats frolic above and below ground. Their entertaining antics are enchanting to watch. The newest addition is Land of Change, which opened Memorial Day weekend. Here, visitors follow a path within the kangaroo enclosure, where the marsupials have free range to hop along the path, too. On a hot day, though, they’ll likely be content to relax in the shade near their barn.

Best of all, the entire complex is so lushly planted that even on a summer day it is relatively cool. Kids can blow off steam at the Indian River Play Lagoon, an exceptional splash pad that is self contained within the zoo and included in admission.

Cocoa Beach Pier. Most Orlandoans love a beach day but may not know that the iconic Cocoa Beach Pier is better than ever, with new dining options, resort-style services and even surf lessons to make a day at the beach completely seamless.

Westgate Resorts bought the aging pier in 2014 and has spent millions of dollars to stabilize the 1962 structure and enhance visitors’ experiences.

Forget schlepping your gear. Now, you can rent chairs in the shade and order lunch (even cocktails) from roving servers. The pier also has brought on local company Cocoa Beach Surf School by Flohana to offer surf lessons from instructors who are commited to helping newbies catch waves.

For those who prefer their ocean views without their feet in the sand, head out on the pier, which extends 800 feet into the Atlantic. The shops, bars and restaurants have all been refreshed with some notable upgrades such as the floor-to-ceiling windows at Pelican’s Bar and Grill, which make waiting for a window-front table worthwhile. (A buzzer system makes waiting painless.) The old tiki bar at the end of the pier has been completely replaced by the Rikki Tiki Tavern, which opened in May and is a family friendly perch for a casual bite and for watching surfers, cruise ships and even a rocket launch if the timing is right.

You may want to save the beach for last because with all the pier improvements, you may not make it anywhere else.

The Courtyard Marriott is a comfortable base for exploring Space Coast attractions (though it’s not directly on the beach). Plan your adventures at visitspacecoast.com

Dinosaurs
Want to see the largest predatory dinosaur skeleton in the New World? A full cast made from fossils found in Argentina is one of endless treasures housed in the Museum of Dinosaurs and Ancient Cultures on the upper two floors of the Dinosaur Store. Admission is $14. dinosaurstore.com

Rocket Launch
The closest public viewing for a rocket launch is at Kennedy Space Center; it requires an admission fee on top of a regular ticket (kennedyspacecenter.com/blog). Find a list of prime viewing areas that includes specific parks and beaches at visitspacecoast.com/launches/launch-venues.

Night Paddle
Dip your paddle in the water on a dark summer night to see the water light up with  bioluminescence—a natural phenomenon that occurs when warm water produces an algae bloom that is activated by movement. Kayak trips run from Kiwanis Island Park on Merritt Island. Cost is $40 per person. kayakcocoabeach.com

Wildlife Festival
Photographers, birders and wildlife will flock to the annual Space Coast Birding & Wildlife Festival January 24-29 in Titusville. Workshops, field trips and street parties are just some of the activities to enjoy when not viewing rare birds and other Florida wildlife. spacecoastbirdingandwildlifefestival.org