Local dining power couple Jason and Sue Chin set out to create a comfortable and welcoming space with the help of Executive Chef Josh Oakley. 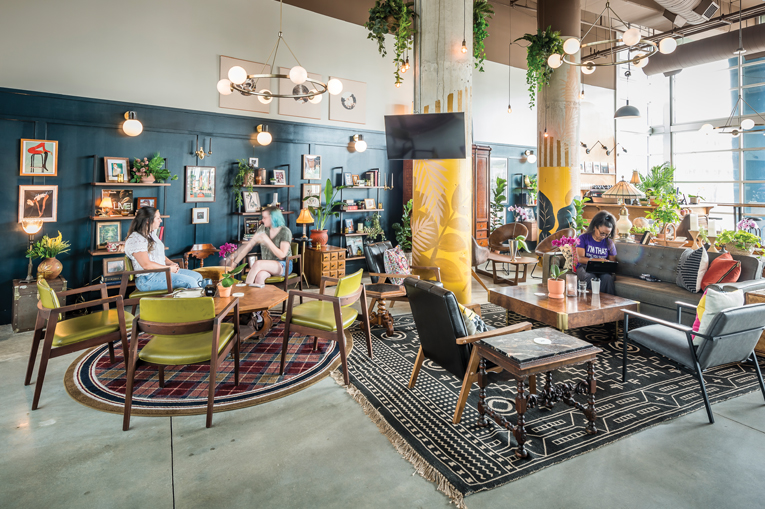 On a warm spring evening, I park in the Union West Garage, one of only a handful of patrons. Walking toward The Monroe, I encounter sounds and sights of construction everywhere—and little else; not much foot traffic, and the park that’s taking shape across Terry Avenue still looks more like a big dirt pit than the welcoming green space it’s destined to become.

But times are changing.

This is the heart of Creative Village, and soon the district will buzz with energy that matches the warmth already evident inside The Monroe.

This was my first visit to Creative Village, the mixed-use development, just to the West of I-4 on the edge of Parramore. The goal of planners and city alike is to create “a true ‘live, work, learn and play’ urban district.” The UCF/Valencia College downtown campus opened in August 2019, and the development was just gaining steam when the challenges of 2020 hit. However, developers were undaunted, and work went forward, including the announcement of The Monroe in September of 2020, which now occupies the first floor of The Julian, an apartment building. 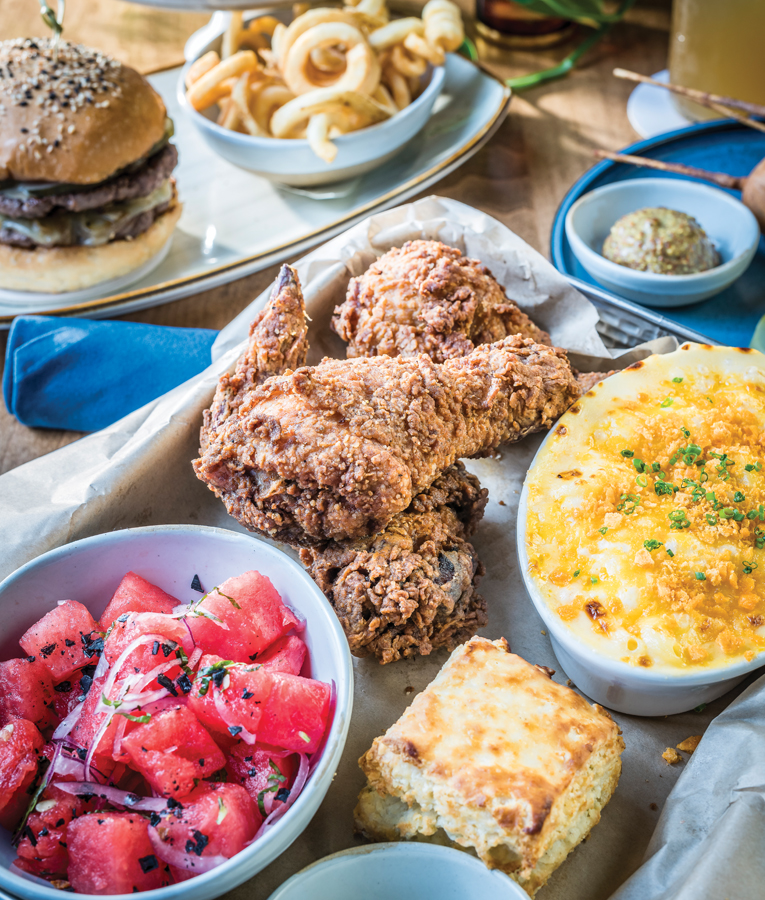 Fried Chicken is a popular choice with guests. ROBERTO GONZALEZ.

I’ve read a lot about The Monroe, named for Dr. William Monroe Wells, a medical doctor and civil rights activist who often provided free healthcare to Black families in Orlando, and who founded the Wells’Built Hotel. But one thing hasn’t been clear, outside of the spot’s own social media channels and website: The restaurant’s owners want it to be more than just a dining spot. They envision it as a destination.

“In the beginning we kept saying, What do we name it? Monroe Restaurant? Monroe Social Hall? The social hall part kept coming up, because we wanted this place to be really social, bringing the community together. Bringing people together in the neighborhood,” shares Sue Chin, who co-owns the restaurant with her husband, Jason.

In fact, that was the impetus for the coffee bar, just one of the space’s offerings. “That’s why we thought about putting a coffee bar here, so during the day, people could bring their friends and have meetings, professors can have their meetings here.” Crack open the laptop across from your bestie, business partner, or study group, and collaborate. And there’s more to come.

As I walked through the front door—you can’t miss it, flanked by greenery and topped with a cool, flashy, retro sign—I was immediately struck by the beautiful decor, and how it softened the industrial space, with its high ceilings, wall of windows and exposed ductwork. As with sister Good Salt Group restaurants, Seito Sushi, The Osprey and Reyes Mezcaleria, the space is stunning. Directly ahead lies the coffee bar and several cozy seating arrangements. A little further back, the bar and bar seating take center stage, while restaurant seating occupies a space to the left. A semi-open kitchen allows patrons a glimpse of the action. 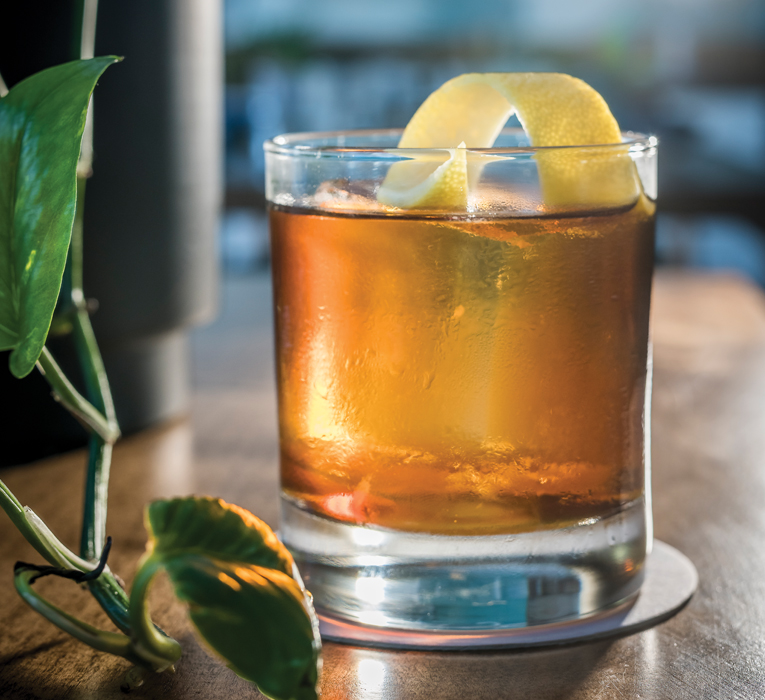 The homey seating, grouped into smaller gathering spots in the lounge area, takes what could feel like a soulless open concept, and breaks it up thoughtfully. Your attention here is soon captured by the overarching vision, and then you start to notice the minute details: mid-century furniture; a liquor cabinet straight from a 1960s sitcom. (Seriously. I half expected Samantha Stephens to hand me a martini.) Warm colors and knickknacks remind me of my grandparents’ home. Rugs and murals soften your step and help to cut down on noise.

And what’s the vibe? Comfort. From decor, to food, The Monroe is a spot that you can cozy up to. That emerged as the theme early on, says the team. “We focused pretty quickly on the term modern comfort food. That’s kind of always been my style, nothing too fancy or flashy but still definitely creative I think,” explains Executive Chef Josh Oakley, who Jason and Sue tapped to helm the kitchen. And it’s important to distinguish that the food isn’t strictly Southern; Chef Josh wants to embrace dishes from all regions. “There’s obviously a lot of Southern influence,” he says, noting that the presence of biscuits and fried chicken obviously skew in that direction. “But Pastrami Corn Dogs are certainly not Southern. So, there’s a lot of that influence without doing the exact same,” he says.

That’s evident from the diverse menu. Shrimp and Grits are offered, but the grits are made with rice grits, a departure from the hominy staple normally favored in the Low Country favorite. And dishes like Frito Pie, straight out of the Southwest, also signal that The Monroe is looking to represent—and celebrate—diverse flavor profiles, with a desire to surprise. “People have been asking me for a year, ‘What kind

of place is this going to be?’” explains Chef Josh. And I’ve said, ‘This is going to be a fun place.’”
As my dining companion and I settled in for our first visit, our server enthusiastically offered suggestions and adept descriptions of drink and starter options.

We decided to start with a couple of cocktails. My friend favored the Infante, a concoction of blanco tequila, almond, citrus and nutmeg. She pronounced the drink dangerous—in a completely wonderful way, the kind of drink that slips down quickly; before you know it, you’re ordering a second round. I chose Our Old Fashioned, intrigued by the change to the normally straightforward profile that salted banana demerara might bring to the classic sip, especially since I’m not a fan of banana flavoring. Instead of something artificial, I experienced a weighted top note that reminded me of butterscotch. To complement the drinks, we tried the Fried Peanuts, which arrived at the table dusted with barbecue spice and in the shell. We were advised that we could consume the whole peanut—shell and all—so we gave it a try. While my friend wholeheartedly embraced the textures, I ended up cracking the peanuts open after the first few for a more enjoyable bite. 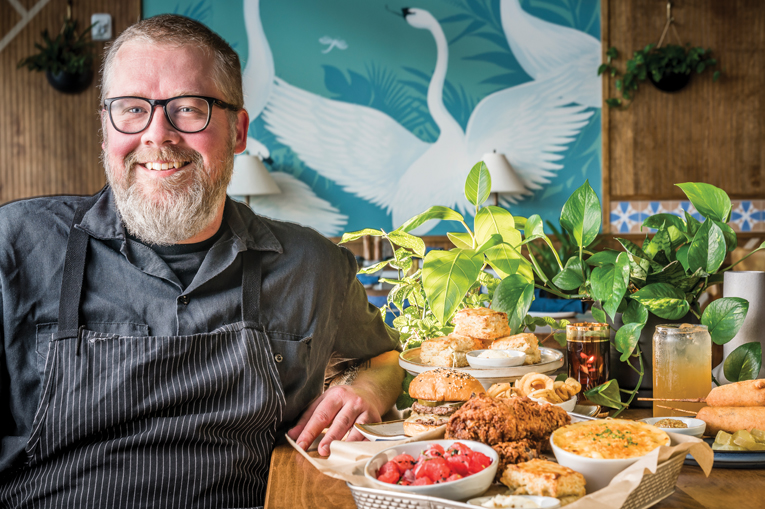 You can get a burger and a beer, or you can dress up and get a couple bottles of wine and go crazy. To a good extent, it can be whatever you want it to be.” -Executive Chef Josh Oakley

Next came a few starters, beginning with the aforementioned Pastrami Corn Dogs. All of the flavors here were surprisingly subtle, and yet unmistakable. The batter, perfumed by rye, offered a lovely, tender texture against the gently Pastrami-spiced house-made sausage. The dipping mustard provided a bright balance to the rich flavors.

Clear attention is also given to seasonal dishes. Since we visited during the height of the fleeting Florida peach season, we had to try the Peach Salad as well. Salty notes from country ham intersected with sweet peaches, rich smoked bleu cheese and meaty mushrooms for a salad that was satisfying and beautiful. While the salad option is sure to change by the time this story is published, the takeaway is this: try the salad. It will be worth your time.

As we moved onto entrees, two variations on chicken captured our interest. Roasted chicken broth and chewy udon noodles brought depth and dimension to Chicken Noodle Soup. We also couldn’t resist trying the house Fried Chicken offered with two sides. Since this was a meal that was all about comfort, I chose mashed potatoes with traditional gravy and mac and cheese, which comes topped with a sprinkling of Cheez-It crackers for color and crunch. We enjoyed our selections, both large enough to yield leftovers. 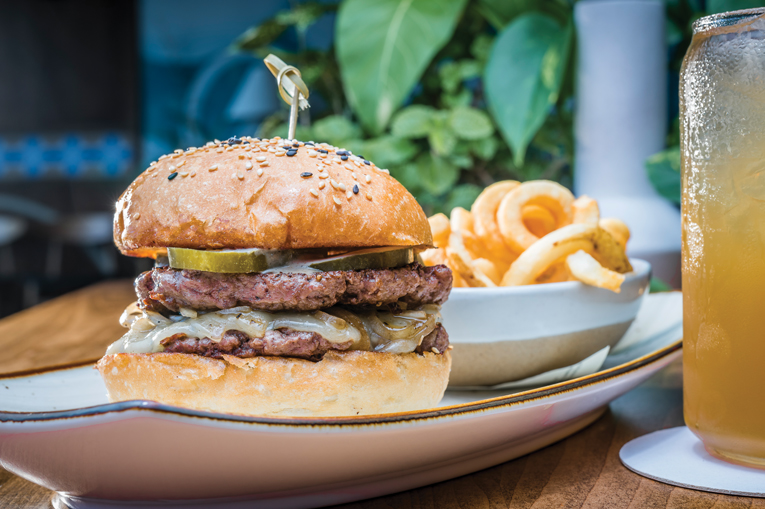 The small dessert menu offered enough temptation to lure us, so we tried the Buttermilk Pie as well. The somewhat deconstructed dish came topped with dainty cornmeal shortbread cookies perched on top instead of being incorporated into a traditional crust. All in all, the meal was satisfying and left us wanting to explore the menu further.

So, what’s on the horizon for The Monroe? Plenty. Jason hopes that the restaurant, with its downtown-adjacent location, draws more diners back to the heart of the city. “We’re hoping this can be a part of that progress so that downtown becomes more known as a dining destination.”
Chef Josh agrees, and sees the relaxed environment as eminently approachable for all. “You can get a burger and a beer, or you can dress up and get a couple bottles of wine and go crazy. To a good extent, it can be whatever you want it to be.”

Also in the works is an outside venue that’s being treated as its own separate concept. The area will face the new park, and will include an outside bar and a different menu. They’re “still tossing ideas around,” says Chef Josh. “More like finger foods. Stuff that’s very quick-serve.”

For now, we’ll watch with interest as the vision continues to take shape, this place where all are welcome. Is that the point, I ask? Maybe The Monroe is more than just a neighborhood place for Creative Village, or for Parramore. “Yeah,” says Jason. “Maybe it’s the living room of downtown.”

They’re off to a good start.

This article appears in the August 2021 issue of Orlando Magazine.
Categories: Dining
Tags: Creative Village, food and drink, fried chicken, the monroe
Want to read the whole issue? Download and read this issue and others on Magzter.